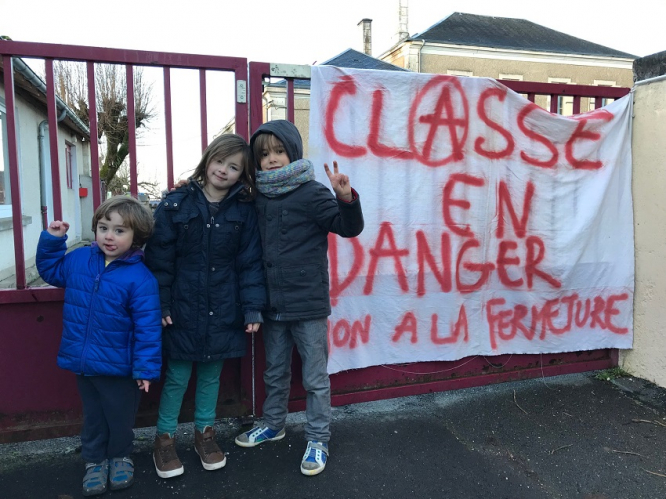 Darya Beacon, left, and friend Emrys Baribeau Lugo beside the protest sign outside the school in Génis, Dordogne
By Connexion journalist

Across the country, banners have been put up at primary schools protesting against class closures.

In the Dordogne, seven classes are to be closed.

Briton Jason Beacon, a writer whose two children go to school in Génis, said: “We are typical of young Brits and French people from the cities, attracted to a life in the country with a better lifestyle for our children, which is now possible with the advent of all-access internet coverage.

“We understand the costs of running classes and the economic benefits of merging small local schools, but the indigenous parents and fellow foreign tax-paying residents like us are understandably worried.

“Schools are the heart of an already besieged village way of life in rural France.”

Education authorities say classes have to be closed because the Dordogne is expected to have 600 fewer pupils next year.

But Francette Popineau, of teacher’s union SNUipp, said rural schools and maternal classes are always the first to be cut. “It’s short-sighted,” she said.

“Once a class is closed, it is hard to re-open it. Closing them doesn’t take into account the constantly fluctuating nature of class sizes.

“Running down schools means that a village becomes less attractive to newcomers so slowly the village dies.” She said that although the government had promised 2,325 new posts, it is not enough: “Four thousand will be necessary at national level just to cover the new measure halving class sizes in priority areas, mostly in cities, so depriving classes in rural areas.

“We have one of the highest numbers of pupils per primary class in Europe, in 23rd place out of 34, and we need more teachers.”

Cédric Szabo, director of the Association of Rural Mayors, which represents 10,000 communes out of 35,000, said it is clear government policy is to create centralised schools, but this appears better in theory than in practice: “Decision-makers in Paris do not realise the distances and the difficulty of organising transport in the countryside. They want us to use less petrol for the environment but travel further for basic services. We are getting angrier every year.

“We are putting out a red alert and urge the president to listen and properly understand what we have to say.”

The government insists it is increasing teacher numbers. When President Macron met 600 rural mayors in the Lot recently, he said “zero class closures is impossible”, but added: “Where we can, we will keep classes open.”

The final decision to close or open a class is taken at the end of every February based on reports from a panel made up of councillors, teachers and parents. It is looked at again in June when pupil figures for the following year are finalised.