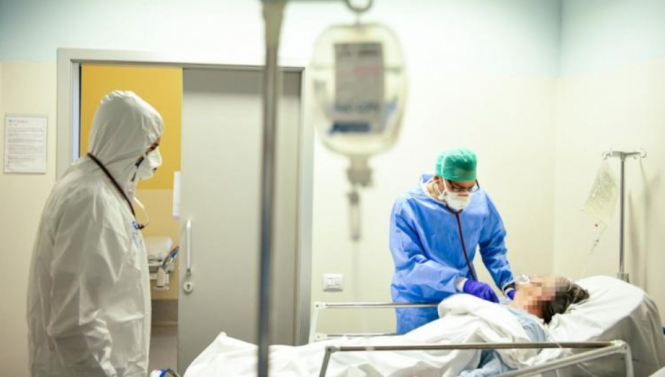 Fewer people entering intensive care has been seen as a sign of hope, days after director general of regional health agency l’Agence Régionale de Santé (ARS) of Île-de-France, Aurélien Rousseau, said that France was set to hit the “peak” of the epidemic imminently.

Read more: France should be ‘careful’ as it reaches peak Covid-19

On Monday, President Emmanuel Macron is set to make a televised address to the nation on Monday April 13 on the latest Covid-19 situation, and will confirm the extension of confinement measures beyond April 15.

The Elysée said that the President would be “consult[ing] with a large number of public and private figures - French, European, and international - to discuss the major issues related to Covid-19, and to prepare the decisions that will be announced the French public on Monday”.

Read more: Confinement in France will be extended after April 15

In his most recent daily update, director general of health Jérôme Salomon said: “The tension is slightly easing among certain intensive care services in some regions, but is becoming stronger in others.”

Currently, there are 30,375 being treated in hospital for a coronavirus-related infection; including 7,148 serious cases in intensive care, of which 482 people were transferred to intensive care in the previous 24 hours.

The most recent figures (Wednesday April 8) showed that the rise of people being admitted to intensive care was decreasing, with a net figure of 17. This is compared to 59 on Tuesday April 7, 94 on Monday April 6, and 140 on Sunday April 5.

The number of people in intensive care is a key figure for health professionals, as it shows the extent of the pressure on the health system as a whole.

There were 541 extra deaths over the previous 24 hours, Professor Salomon said, bringing the total number of deaths in France to 7,632 since March 1; and 10,869 in total since the virus began.

However, the number of deaths from elderly care homes specifically was not able to be updated “due to a technical problem”, so the official number remained at 3,237.

See all of the maps here, or click the image below.

Number of people in intensive care per 10,000 residents by department (Updated April 8)