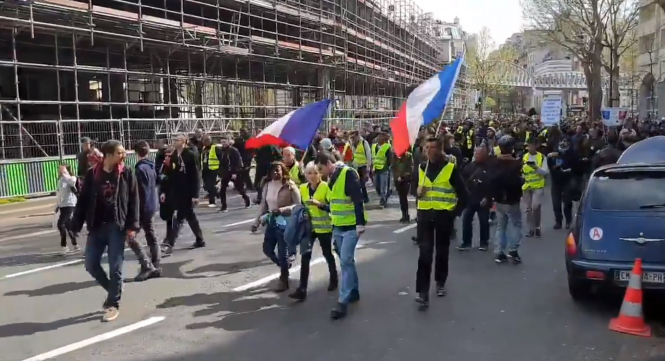 There were 3,500 in Paris, according to the ministry for the Interior, although protester figures always show a higher number due to variations in counting methods.

This weekend, some protesters said there were 50,000 more people present compared to official figures.

Saturday April 5 marked the fifth consecutive month of protests since the movement began in November 2018. It comes three days after the “anti-vandalism” law intended to prohibit violent protests and impose stricter sanctions on violent individuals, was blocked.

It also comes two days before the first conclusions from contributions to President Emmanuel Macron’s Grand Débat National are set to be drawn.

In Paris, 43 people were arrested, alongside 14,919 on-site reprimands, and nine verbal warnings regarding protests in areas that police said had not been authorised.

Éric Drouet, one of the so-called “leaders” of the movement, received a caution for allegedly being in a forbidden protest area, near the Champs-Élysées; a claim that his lawyer has denied.

In Rouen, protests turned aggressive after a relatively-calm start.

Rubbish bins were set on fire, a building was damaged, and a construction vehicle was set alight by a group of people dressed in black. Tear gas was used against some protesters, and the movement was prevented from entering the town centre.

#ActeXXI of the #Giletsjaunes at #Rouen : the tension is palpable after a brief exchange of blows between #CRS and protesters.#Yellowvests #Acte21
pic.twitter.com/pHf3tQXF7m

Elsewhere, there were protests and some clashes in most major towns and cities, including Lyon, Dijon, Nice, Nantes, Montpellier, Bordeaux and Toulouse.

A number of towns have taken out decrees banning protests in the town centre, including Auxerre (Yonne, Bourgogne-Franche-Comté) and Bourg-en-Bresse (Ain, Auvergne-Rhône-Alpes).

In Saint-Nazaire, around 500 gilets jaunes protesters have gathered - from Friday 5 to Sunday 7 - to hold the second “assemblée des assemblées (assembly of meetings)”.

This saw working groups and others join together to focus on “internal and external communication...in the face of repression...and reprisals”.