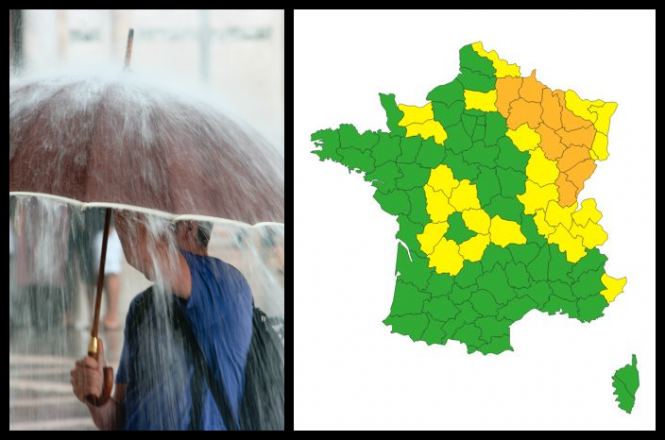 Orange alert means “be very vigilant”. There are possible dangers and you should remain up to date with the situation and follow the advice of local authorities, Météo-France states.

The total rainfall is expected to be significant, generally between 50 and 70mm in the departments under orange alert, which is the equivalent of between three weeks and one month of rain in normal times.

“The worrying aspect is that it occurs 24 hours after an already significant rainy episode, on saturated soils, accentuating runoff phenomena,” the weather service states.

The heavy rains will continue during the morning in all departments under orange alert. There could be between five to 10mm of rainfall per hour.

Alix Roumagnac, president of Predict Services, the "risk" branch of Météo-France, said the weather had not been normal in the region this year.

"It's been two and a half months that there have been thunderstorms or rains in succession over a large part of northern and eastern France, it's unusual," he told Franceinfo yesterday (July 14).

The rains will gradually diminish later in the day today.

For Haute-Marne and Haute-Saône, this will occur some time this afternoon, while in Doubs and Jura, the calm is not expected to return until Thursday night, Météo-France states.

Road traffic conditions may be difficult on minor roads and there may be some disruption with trains not on the main lines.

Power cuts may occur in the affected departments.

Hotter, drier summers ‘will be the new normal in France’

21 hours ago
3
Fifth Covid wave: Ministers to meet, what measures could France take?

Animal spotted by farmers in Calvados, Normandy confirmed to be a wolf
23 November 2021

All new cars in France to have automated speed monitors from July 2022
24 November 2021
More from French news
More from Connexion
Get news, views and information from France
Join the newsletter
Subscribe to The Connexion