Four questions to understand the 1961 killing of Algerians in Paris 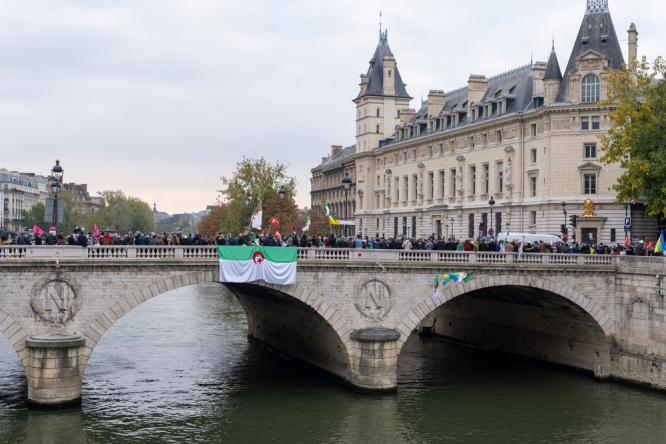 People pay tribute to victims of the 1961 killings last year in Paris. President Emmanuel Macron attended this year's commemoration, making him the first acting president to do so Pic: Nicolas_photo / Shutterstock

60 years ago today, on October 17, 1961, French police turned on Algerians demonstrating peacefully in Paris, shooting some and drowning others. The number of victims remains disputed, with estimates ranging from between several dozen to several hundred.

Yesterday (October 16), he attended a commemorative event for the victims along the banks of the river Seine in Paris, becoming the first acting president to do so.

“France looks at its entire history with clarity and recognises clearly established responsibilities,” he said.

“The crimes committed on the night of October 17, 1961, under the authority of Maurice Papon, are inexcusable for the Republic. Today we pay tribute to the victims.”

Maurice Papon was the prefect of the Paris police at the time of the attacks. In 1998, he was convicted as having been complicit with the Nazis in crimes against humanity. He was given a ten-year sentence but served less than three years.

Former French president François Hollande also acknowledged the deaths back in 2012, but did not place blame on specific actors.

What was the context?

The early 1960s was a period of decolonisation, with 17 African countries gaining their independence from European colonial powers in 1960.

The route to independence was often violent and bloody, as highlighted by the 2020 documentary film ‘Décolonisations, du Sang et des Larmes’ (Decolonisation, by blood and tears), directed by filmmaker David Korn-Brzoza.

Le Front de libération nationale (FLN) was an Algerian political party, created in 1954 with the objective of achieving independence from France.

One month before the October 17 massacre in Paris, five French police officers were killed and a dozen others were injured during an attack perpetrated by the FLN, Franceinfo reported.

Maurice Papon, the police prefect at the time, decided to suspend the ceremonial funerals of the officers, fearing that they would have to be held "every week", according to historian Emmanuel Blanchard, quoted by Le Monde.

"One can imagine the spirit of revenge generated by this context," Mr Blanchard said.

The FLN called for a peaceful protest in the streets of Paris to demand Algerian independence and an end to the curfew on "Algerian Muslims", which had been in place since October 5.

"Algerian Muslim workers are urged to refrain from travelling at night in the streets of Paris and its suburbs, especially from 20:30 to 05.30," a statement from the Paris police prefecture at the time reads.

Between 20,000 and 30,000 Algerians participated in this demonstration.

Around 10,000 police officers were mobilised and given the order to prevent the demonstrators from entering the centre of the capital.

Many were stationed on the bridges of Bezons, Gennevilliers and Neuilly.

There are reports of protestors being beaten by the police with clubs and rifle butts. Several of them were shot and then thrown into the river Seine, historian Mr Blanchard said. Many experts and historians describe the events as a massacre.

How did France react?

No one was officially blamed for the crimes.

Maurice Papon even remained in his job until 1967, without ever being investigated for his handling of the incident.

The official death toll was counted as three the day after the massacre, and increased to seven a few days later. It was corrected in 1991 for the first time by the historian Jean-Luc Enaudi in the book ‘La Bataille de Paris, 17 octobre 1961’. He claims "at least 200 dead" and 193 missing.

President Hollande opened the way for state recognition of the events in a statement in 2012.

"On October 17, 1961, Algerians demonstrating for the right to independence were killed in a bloody crackdown. The Republic recognises these facts with clarity. Fifty-one years after this tragedy, I pay tribute to the memory of the victims," he said.

The words were similar to the sentiments evoked yesterday by President Macron, who went a step further by placing blame on Maurice Papon.

What was the reaction to President Macron’s comments?

“We are very disappointed by this statement by the president,” said director and writer Mehdi Lallaoui, who is also the president of the association Au nom de la mémoire, which seeks to better contextualise historical events.

“We were hoping for a strong statement that would tell the whole truth, but unfortunately we did not get it,” he added.

Mr Lallaoui’s father was involved in the 1961 protests and was beaten by police.

“The perfect Maurice Papon did not direct the repression on his own initiative. The politicians responsible for the state crime are: Prime Minister Debré, Interior Minister Frey, as well as De Gaulle, who let it happen.”

Macron lists ‘diverse heroes’ for use in new street names