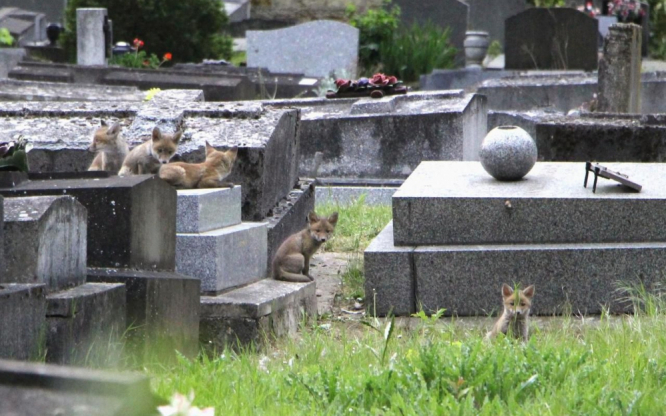 The cubs, which were born in April, were spotted by the Ivry-sur-Seine cemetery conservationist, Benoît Gallot.

They are said to play and run around in the lush green space during the day, waiting for their parents to bring food in the evening.

Although playful, they are not thought to be dangerous, especially since rabies in foxes disappeared over 20 years ago, and foxes tend to be timid by nature.

Despite its proximity to the city, the space is slightly overgrown and seen as a hub of biodiversity, due to the prohibition of the use of herbicides or pesticides on the land.

It attracts many wild birds and animals, including hawks, woodpeckers, bats, and owls. There are also hedgehogs, for which the Paris mairie has even created special hibernation cabins.

Mr Gallot, who has worked at the cemetery since 2010, said: “I have always seen one or two adult foxes, but this is the first time that I have seen so many cubs.”

These foxes are not the only cubs to have made headlines recently; a baby wolf cub that was born in April at the Parc Alpha in the Côte d'Azur attracted much online attention after internet users were asked to decide a name for him.

The cub, who weighs around 2kg and measures just 51cm long, was born to parents Khan and Hoona, two alpha wolves living at the park.

After users on the Parc Alpha Facebook Page were asked to choose from a list of five names - Odin, Thorgal, Thanka, Altaïr and Fenrir - the little cub was recently baptised Fenrir.