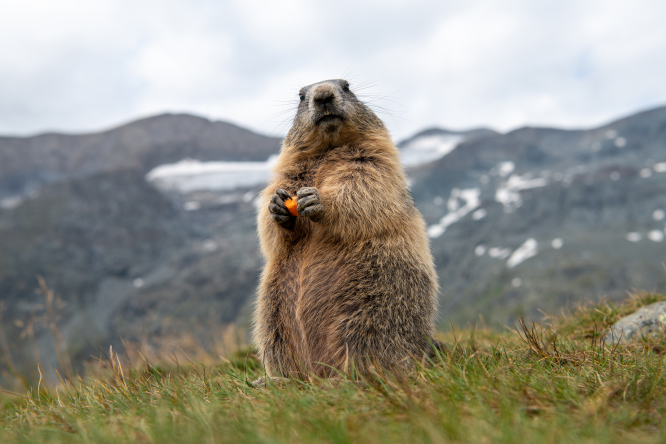 France 3's funny CGI characters are based on European marmots, as seen here in the Alps Pic: mhp / Shutterstock

The hilarious animals, created with computer wizardry by Dream On studios in Paris, have now been regulars on the channel at advert and announcement breaks for over five years. The timing led to France 3’s decision to make a comparison in its new clip with a French president leaving office after his quinquennat (five-year term).

European marmots (marmotte in French), a large, chunky, burrowing squirrel, are closely related to American marmots, known as a groundhog.

In the clip, which will be shown regularly on France 3 now until its rentrée scheduling starts in early September, we see a marmotte sitting at a desk wearing a Légion d’honneur lapel pin, saying a solemn “au revoir” before leaving its desk and walking away.

The animal then opens a door at the back and we hear a clucking sound – possibly a reference to what kind of creature will be replacing the marmottes in a new clip promised for the Christmas holidays.

Some viewers may spot the fact that the clip is a parody of the televised departure speech of then president Valéry Giscard d’Estaing in May 1981 – complete with the flowers on the desk, the bald spot when the marmotte turns to leave and the Marseillaise.

Wording on the screen says: “After a quinquennat on France 3, the marmottes are bowing out”; then “meet the new incumbent in December”.

The marmottes first appeared on screen in 2015 and since then have been regulars especially during major sporting events and at Christmas.

They are especially loved for their sporting clips, taking part in activities such as swimming, shooting, basketball, fencing… with memorable moments including their version of a New Zealand haka performance, or a football scene with a marmotte rolling around the pitch pretending to have been injured.

Other funny clips have included parodies of films such as Titanic and Rocky – as well as French favourites such as Les Bronzés font du ski or Les Visiteurs  –  and parodies of different musical styles and groups including the Beatles, Indochine or Daft Punk.

A clip of the marmottes taking part in curling caused a buzz in America at the end of last year after a Wisconsin resident shared it on social media.

France 3 estimates that the marmottes had been watched around 70 million times by January this year. They have also won some 37 industry prizes around the world.

More marmottes clips are on France 3’s website at this link.