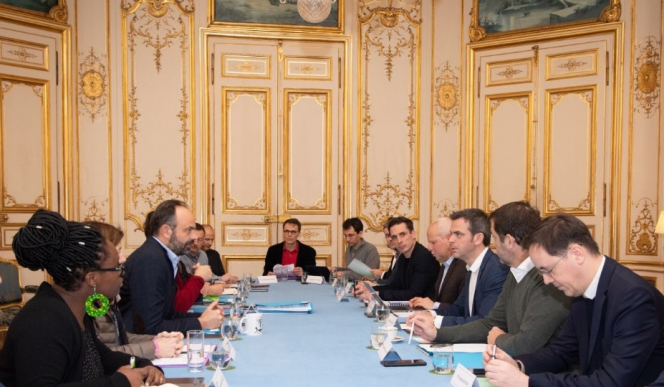 Health minister Olivier Véran said the objective was to have at least one hospital prepared for the virus per urban area.

“I have decided, in agreement with the Prime Minister, that 70 establishments with a SAMU [urgent response team, service d’aide médicale urgente] will be activated tomorrow to increase our response capacity if necessary.”

France is also planning to increase its “testing capacity”, he said, including increasing the test methods, and ordering “large quantities” of protection masks.

He added: “We are acting quickly and decisively in the face of the threat of an epidemic...We are taking all the necessary measures to ensure the safety of the French people.”

Mr Véran said that he had spoken with his Italian and German counterparts to coordinate the response, especially in light of recent cases of the virus being confirmed in Italy.

He said: “We have spoken to set up a meeting with several health ministers from across the European Union, probably next week, to talk about how to face this epidemic together.”

Yet, he said that there would be “no sense” in closing the French border with Italy, as we are “not yet talking of a proper epidemic” and because “viruses don’t stop at borders”. He said: “We are looking at [the situation] with a huge amount of attention and precaution, and we are looking at how the situation is changing hour by hour.”

The minister said that France had already shown how it would deal with a potential outbreak, after a British man who had travelled from Singapore infected several people during a ski trip to Contamines-Montjoie, in the Haute-Savoie.

He said: “We had to close schools, and do hundreds of tests on children and adults. We were able to isolate everyone who was ill, and heal them. They all left the hospital well and non-contagious. That is how we can eliminate the risk of an epidemic.”

He added that the situation had not changed in France recently, where just one infected person is still in hospital. One Chinese tourist died in Paris, and ten other patients have recovered.

The health minister’s comments come as economy minister Bruno Le Maire said that France had seen 30-40% fewer tourists this year already due to the virus.

He said: “This will obviously have a significant impact on the French economy.”

France normally welcomes 2.7 million Chinese tourists per year. The virus is thought to have had knock-on effects to other nations and wider tourism too.

Figures from American news network CNBC have suggested that Covid-19 has been linked to the cancellation of 200,000 flights around the world.