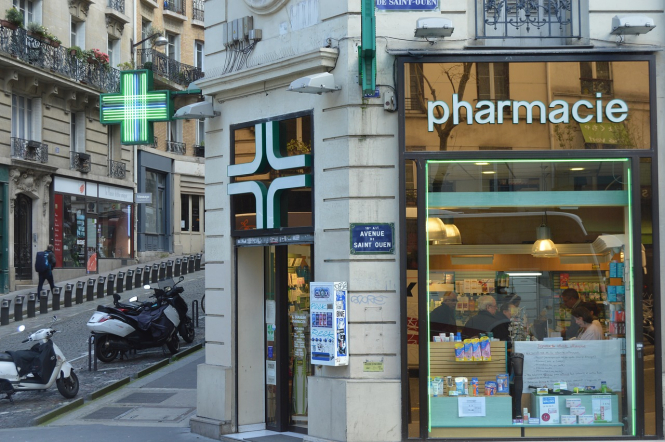 Pharmacies across France are authorised to give the jab from today, but many say they lack doses
By Hannah Thompson

Pharmacists in France have warned that they lack doses of Covid-19 vaccines, as the campaign to allow pharmacies to give jabs begins today (March 15), and worries grow over the AstraZeneca vaccine.

Pharmacies across the country are authorised to give the jab from today.

People aged 75 and over, aged 50 or over with risk factors, or those suffering from at-risk conditions, are still on the priority list in France to receive vaccinations. Yet, pharmacists now have permission to prescribe a vaccine to anyone - except those with certain medical conditions, and pregnant women.

Health professionals can also get a vaccine from a pharmacy, if they have not had one already.

Pharmacies will be able to give out their own prescriptions, decide if a patient is eligible themselves, and vaccinate people without a GP note. Patients will have to fill out a consent and information questionnaire to ensure they are healthy enough to be vaccinated.

Pharmacists starting vaccinations today are paid €7.90 for the act of vaccination, while the vaccine itself is given freely. The amount includes the vaccine prescription, and the provision of the patient questionnaire. It is €1.60 more than the amount normally received for the flu vaccination.

Appointments can be booked directly in pharmacies via the website covid-pharma.fr.

Yet, many pharmacies have said that they do not yet have enough doses to fulfil their appointment demand.

Pascal Fontaine, commercial director of the pharmacies Lafayette group, told news service BFMTV: “We were supposed to have one 10-dose bottle per pharmacy, then two bottles, and then we learned through [health minister] Olivier Véran that it will actually be far less.

“Meanwhile, our 124 pharmacies are ready, we have millions of syringes, we have trained all of our pharmacists, and our appointment platform on Doctolib is ready, but we do not know when we have the doses, and how many.”

Pharmacies have been receiving vaccines for several weeks already, but only to then send bottles on to GPs. They have since ordered doses for their own use, but many have not yet received any.

Mr Fontaine said: “We hope to receive the first bottles today in the 18 priority departments. For the other departments, it will not be before March 20.”

France is counting on opening vaccinations to pharmacists to help speed up the rollout - using the AstraZeneca jab, which is easier to transport and store - despite the reported delays.

Emmanuel Déchin, head of pharmaceutical wholesaler and distribution group Chambre Syndicale de la Répartition Pharmaceutique, said: “We will deliver 335,000 doses in the week of March 15, [for vaccinations] in 1,000 pharmacies.

“In comparison, we delivered 830,000 doses this week at GP surgeries.”

Health authority Santé Publique France allocates ordered AstraZeneca doses to wholesalers, who then deliver them to pharmacists, based on how many appointments have been made via platforms Doctolib and Ordoclic.

Mr Déchin said: “In any case, it will be limited to one vial per pharmacy.”

It comes as AstraZeneca confirmed that there would be further delivery delays to the EU in coming weeks.

France was initially set to receive 6.4 million doses in March, but will in fact only receive 6 million - 400,000 fewer than planned. This partly explains why some doctors will only begin to receive doses this week.

This presents challenges to pharmacists, who need to ensure they have enough vaccines to deliver the second dose - necessary in most cases for a complete vaccination - within the targeted four to nine weeks.

Mr Fontaine said: “When we do the first injection, we will have to set the second appointment between four and nine weeks later.

“We are trying to find ways to save and store doses, because even the government itself doesn’t know how many doses will be available [in future].”

Fears also continue around the AstraZeneca vaccine itself, as several European countries including Austria, Denmark, Iceland, Ireland, Norway, and Bulgaria have suspended its use pending investigations into side-effects experienced by some recipients and blood clotting concerns.

Mr Fontaine said: “Since Friday, we have had half our clients come in to ask questions at our pharmacy counters. Olivier Véran's speech on Thursday was anxiety-inducing.

“[Instead], there should have been scientific communication, and a reminder that the incidence rate of [blood clot] thrombosis is [normally] one person in 1,000; whereas here, we have 30 cases out of 5 million.”

No official link has yet been established between the AstraZeneca vaccine and the blood clotting concern.

In a statement at the weekend, medicines safety authority ANSM said that France had delivered 316,800 doses of the latest AstraZeneca batch (number ABV5300) since February 9, 2021. Of these, it said, half have been administered, and there have not been any deaths or “exceptional reactions” reported, including any cases of thrombosis or blood thickening.

The agency added that the European Medicines Agency continues to recommend the use of the AstraZeneca vaccine in Europe, but that this position could change if the data changes.

It said: “At this stage, nothing indicates that there is a specific problem with the ABV5300 batch, nor that the vaccination causes the effects, which do not appear on the list of side-effects of this vaccine.”

Overall, ANSM figures show that up to March 4, 454,545 AstraZeneca injections have been delivered in France, with reports of undesirable side-effects after 3,013 injections. This equates to less than 1% (0.66%).

In an open letter to newspaper le Journal du Dimanche, doctors last weekend called on the public to not be afraid of getting a vaccine, including the AstraZeneca jab.