French roadside history being lost, one sign at a time 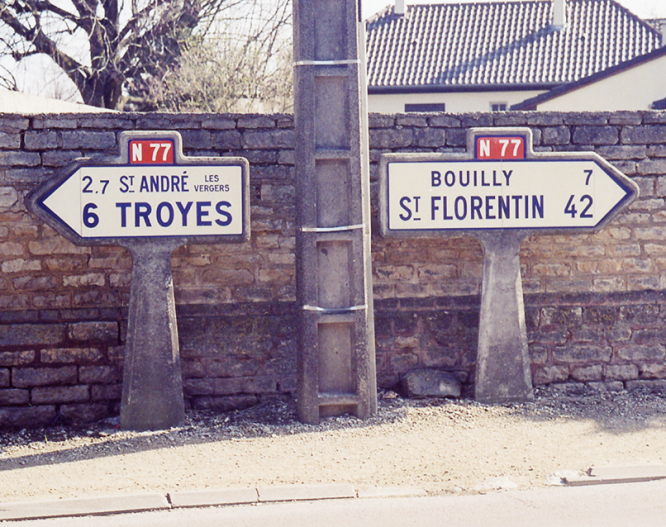 Their UK equivalent could be the red phone box or the yellow AA box and, likewise, they are only being saved by local groups and associations campaigning to keep the remaining enamel on lava rock signs, often set in a standard reinforced concrete post.

First created as an advertising campaign by André Michelin, co-founder with brother Edouard of the tyre company, early signs had a Michelin logo on them to promote their tyres.

They were called ‘merci’ signs as many were sited at the entry to villages with a message Veuillez ralentir [Slow down] and another had Merci on it at the exit.

Early versions, from 1910, had two faces with information such as place names, road numbers as well as the name of the sponsor.

After the First World War, André Michelin took it upon himself to sign France’s roads for early motorists and set a standard design of lava-rock with an enamelled sign to last longer than metal, and with standardised posts.

The first reinforced concrete post was developed in 1918, but it took four more design changes before its final form was agreed in 1928. It was only in 1931 that the signs received official approval.

This established the distinctive-looking road signs France keeps to this day, including the Michelin dark blue lettering.

“I became fascinated by them as a child in the 1970s,” said Philippe de Priester, whose website panneauxenbeton.fr  details their history. “Simply, I find them beautiful and aesthetic.”

In 1946 the state laid down its own rules, with no sponsor’s names.

The use of four-way concrete posts was limited to the most important intersections and the widespread use of arrow signs began, along with standardised international road signs.

Michelin continued to produce the signs and the posts, with giant saws used to slice the hard lava rock into 15mm thick slabs at a speed of five millimetres an hour until 1971, when lighter, less durable enamelled metal or stick on plastic signs took over.

Cut slabs were steam cleaned, treated with mastic to make them smooth, then covered in white enamel paint and sent to 900C kilns to be baked.

Once cool, a coat of blue or red enamel paint gave the text before the signs were sent back for another 900C bake. Finally, they were placed in the concrete mould for the posts, and the concrete poured on top to seal.

The weight of the lava rock signs, which varies from between 100 kg to 150kg, plus the fact that they were so well fitted to the sign posts, makes collecting them difficult.

“It is also one of the reason why they resist in some areas,” said Mr de Priester, who lives in southern Corsica. “You need to think twice before moving something so heavy.”

Today, heaviest concentrations of the signs are in south Finistère, Vendée, Oise and the Hérault back country, but they still cling on in many towns and villages where they are sought after by foreign TV crews doing reports about France, or films, to set the atmosphere.

Known varyingly as borne Michelin or panneaux Michelin the tyre company says it made 300,000 up to the end in 1970. It has a film of how they were made on its michelin.com site.

It is not known how many are left but Mr de Priester says the state does not recognise their heritage value and they are often removed and dumped by national and department workers.

“Attempts to save them are almost all at a very local level. There are a few local associations, or even individuals who fight to keep them as part of our heritage.”