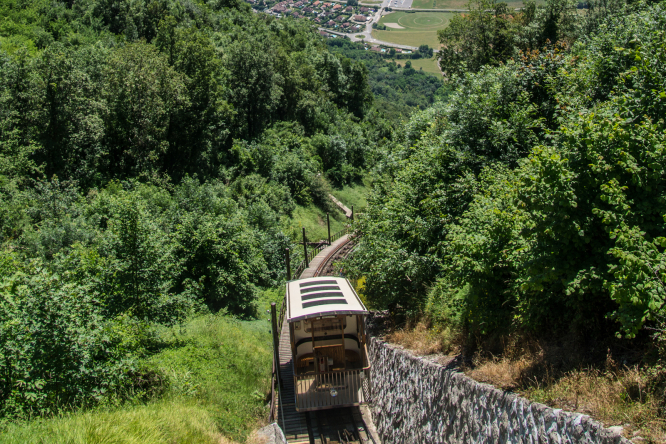 Hang gliders and paragliders now make up 10% of the 60,000 passengers the funicular carries each year Pic: Bertrand louis / Shutterstock

France's steepest passenger funicular is getting ready to celebrate its 100th year of commercial operation in 2024.

Work started on the funicular – a cable-driven railway with counter-balanced rising and descending wagons – in 1920 after a metalworkers’ union decided to build a tuberculosis sanatorium on a plateau above the village of Montfort, Isère.

It took four years to complete, and rises 260m from Montfort to Saint-Hilaire du Touvet, the site of the former sanatorium, at an altitude of 1,000m.

The railway is 1,480m long and the gradient gets progressively steeper to reach 83%.

A 35hp electric motor is all that is needed to power the system, thanks to the gearing and pulleys linked to the wagons.

Travelling at 1.25 metres per second, the trip takes 20 minutes.

The railway’s manager Arnaud Gaillac told The Connexion: “The machinery has had two major revisions, but many of the parts, including the seven-tonne main wheel, are original.

“It is very pleasing to operate such a well-built and thought-out system. We have a team of three mechanics who do a regular greasing and inspection of all the parts every week, using the same instructions which were put in the operating handbook in 1924.” Cables are tested to withstand eight times the maximum allowed weight of the wagons and, if they snap, automatic braking systems, tested every year, bring the wagons to a halt.

The discovery of antibiotics after World War Two finally offered an effective treatment for TB, and the sanatorium was phased out. Its funicular nearly fell into decay before a growing interest from tourists persuaded local authorities to keep it open.

The sanatorium was turned into a physiotherapy centre for people recovering from accidents and strokes before being shut in 2010 and demolished in 2015.

During this time, the funicular continued to operate, and it received a big boost in the 1970s from the burgeoning sport of hang gliding.

Saint-Hilaire du Touvet offers an ideal launch site, and the funicular allows thrill-seekers to fly down to the valley floor and quickly get up to altitude again.

Hang gliders and paragliders now make up 10% of the 60,000 passengers the funicular carries each year.

Each September, the railway is part of Coupe Icare, a festival celebrating human flight and air sports, including categories for pilots with the wackiest costumes, film screenings and a trade show.