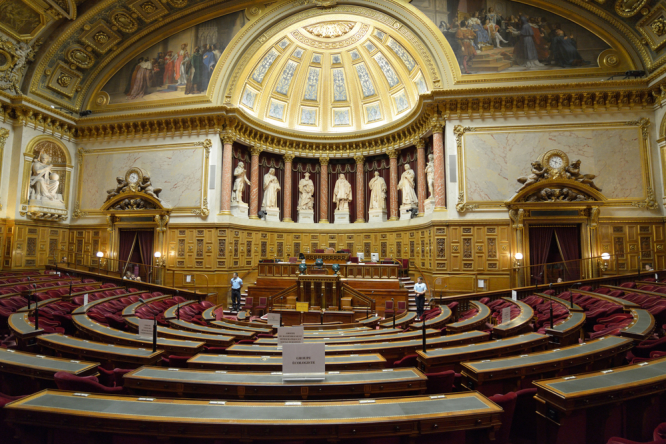 The bill was voted through by the French Senate but some MPs and Senators have criticised it as 'useless Pic: StockphotoVideo / Shutterstock

France has approved a law that will formally allow the gradual ending of the state of health emergency, and the introduction of the health pass (‘pass sanitaire’).

The bill was passed yesterday (May 27) after the Senate approved it with a majority. The bill legalises the gradual ending of the state of health emergency, and the use of the controversial pass sanitaire in France.

This is technically separate to the EU pass that will be used for international travel; but the domestic pass will later be used in conjunction with the EU's travel passes, which are aimed at facilitating travel within the bloc.

The vote means that there is now a legal basis on which the government can announce deconfinement measures, and gradually end the state of health emergency without losing its powers to reconfine or restrict freedoms if the health situation so requires.

The state of health emergency will now end on September 30, not on October 30 as the government had initially wanted.

In their amendments to the text, both MPs and Senators limited the government’s ability to resort to extra curfews and lockdowns as part of the transition out of the state of health emergency.

A curfew will still be possible for 30 days from June 1, with France set to lift the current curfew completely from June 30.

If the government wishes to impose or extend a curfew beyond that date, it will need to go before Parliament again to declare a new state of health emergency.

The Senate also stated that the government will only be allowed to impose local lockdowns of up to one month. Any longer than that, and Parliament will again need to be consulted.

The bill also formalised the introduction of the pass sanitaire.

This will need to be used from June 9 by members of the public when accessing large gatherings with more than 1,000 people, such as festivals.

The health pass will make access to such events conditional on the presentation of a negative Covid test result, proof of vaccination, or a certificate of recovery from infection.

Senators said that its use must be limited to places in which physical distancing is impossible.

Senator Philippe Bas (Manche) also said that its use will be “temporary [and used] for only a summer”, as part of a series of limits on the government’s ability to restrict freedoms.

Laurent Pietraszewski, Junior Pensions and Workplace Health Minister, who was in favour of the bill, said that “sanctions will be levied” if the health pass is demanded outside of these conditions.

Mr Bas said he regretted the confusion that had emerged over the similarities between the French health pass and the EU travel health pass; and “multiple [sources of] information” over the use of a QR code scanned at the entrance to restaurants or sports halls via the TousAntiCovid app.

He said that these are all, currently, “totally different systems”.

The bill was controversial, however, with the left-wing parties voting against, and the green party abstaining.

Left-wing MPs said the bill “gives very significant powers to the government on a too-vague and imprecise basis”, and has asked the Conseil constitutionnel to examine the law.

Yet, Mr Pietraszewski said that the bill was “a fair balance between our freedoms, and the protection of public health”.

Adrien Taquet, Junior Health Minister, said that it was “a balance point between enthusiasm and caution”.

French MPs vote in favour of Covid health pass for use from June 9
MPs agree to end France’s state of health emergency on June 1
Covid-19 France: Why the national curfew is set to end on June 2