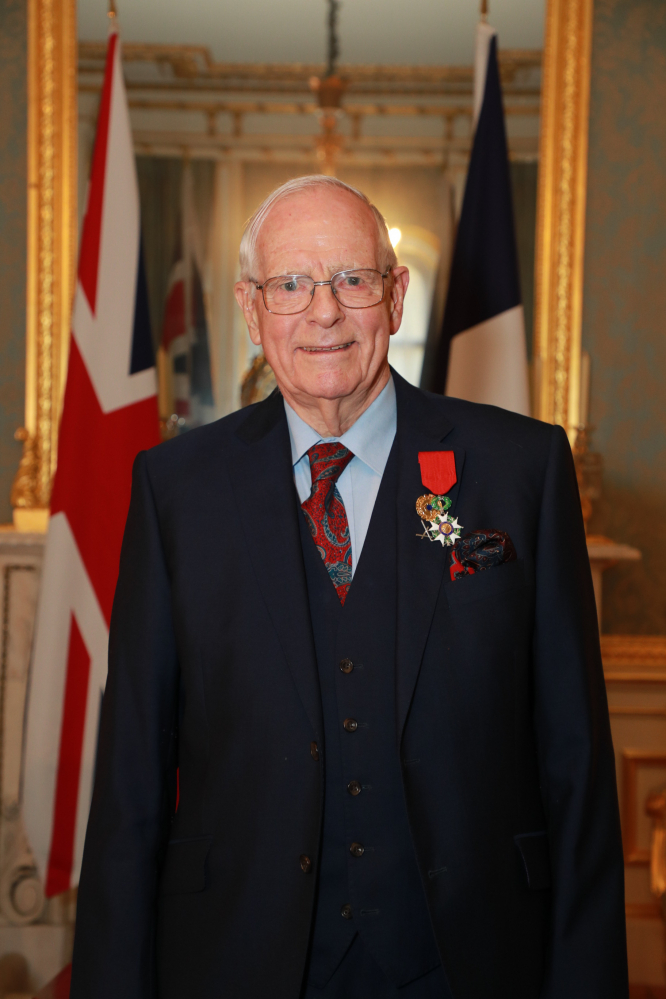 A World War Two hero who played a pivotal role in setting up wireless communications for the D-Day landings has become the 6,000th veteran to receive the Légion d’honneur.

The honour was a welcome surprise for Geoffrey Pidgeon, 93, who worked at MI6 as a teenager.

“My father worked at MI6 and my mother was a Red Cross nurse,” he said. “I wasn’t very good at school. I didn’t enjoy it much.

“One day, I made a model of HMS Nelson, complete with working gun turrets, and my father took it into work.

“When his boss saw it, he said ‘We could use that lad’, and that was that. I joined MI6 and learned to make radios and wire them up.

“My job was making Mark 7 radios in a tiny factory.

“There were six or seven of us and we made 50-100 sets at a time, for ships, aircraft, anything really. Our unit was called Mobile Construction. That was us. If it moved, we would put a radio in it.”

It was 1942 and the Royal Air Force was developing radio because Morse code was too slow and dangerous. “It was around this time that they worked out how someone on the ground could talk to someone in a plane.

“Talking was fast enough, especially when communications were frequency-modulated so the Nazis could never catch what was said, or who was saying it, and if the message was short, they didn’t have time to track the radio down.”

He also worked on ships, and flew on operations over Calais.

“We went ashore in Brittany to land supplies for setting up wireless communications for the D-Day landings. We also fitted ambulances: we took the stretchers out and wired them for radios.

“I remember once we were testing radios in the English Channel, and we had a chap overboard in a dinghy.

“Then the call came through that there were mines floating all around us and to watch out, so we had to hang over the edge with boat hooks to push any mines away and stop them sinking the boat.

“I never even thought about being scared. I don’t know why. I was young, I suppose.”

He says it was a tremendous experience for a 17-18-year-old who wasn’t old enough to be conscripted but was still working with the army.

The family had a three-bed flat near Bletchley Park and Mr Pidgeon remembers it being comfortable.

“We had an expense account, and never ate in the canteen. I looked like a soldier, a signalman, but I wasn’t paid by the army and so didn’t have to obey all the dull army rules.”

After the war in Europe ended in May 1945, the conflict with Japan continued.

“We were doing well in Burma and the Americans were still fighting. But nobody knew about the atomic bomb.

“They were preparing for a terrible war, and the invasion of Japan.

On his return to the UK, Mr Pidgeon and his eldest brother joined the family bathroom supply business that his mother had inherited.

“We were the first to set up showrooms of finished bathrooms, complete with soap and towels, and we had a chain of 20 shops in the end,” he said. He has set down the story of his wartime exploits in an autobiography called The Secret Wireless War and is enjoying the attention that being a decorated war hero has attracted.

“I was invited to 10 Downing Street on Remembrance Sunday before the Cenotaph service. I replied that I was committed to honouring two wartime colleagues at Tempsford airfield and I could not miss that service.

“They replied that they quite understood and offered me a tour of No 10 later in the month with my family.”

Another treasured memory is of meeting the Queen when she unveiled a memorial to the veterans of Bletchley Park.

“While everyone talks about Bletchley Park’s code-breakers, it was a three-part operation. First, the ‘Y’ stations, collecting the Enigma messages; secondly, the code-breakers doing their brilliant work; and finally, MI6 (Section VIII) at Whaddon, who disseminated the intelligence to Allied
commanders in the field.

“My colleague Mavis Batey was in the Bletchley Park team that broke the Italian code indicating that the Italian fleet was putting to sea.

“Then, in a break from protocol, our unit MI6 (Section VIII) sent the ULTRA message to Admiral Cunningham from our Windy Ridge wireless
station in Whaddon village.

“That ULTRA message led to the naval victory known as the Battle of Cape Matapan.