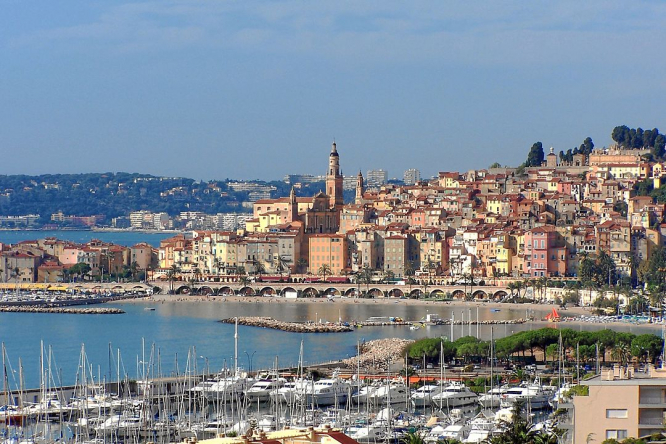 The French Mediterranean coast is vulnerable to tsunamis due to a fault line extending towards Italy (pictured: The town of Menton)
By Hannah Thompson

The French Riviera was placed on tsunami alert last night after seismic activity in Algeria, with tremors felt in Var and across Alpes-Maritimes. The alert was lifted in the early hours of this morning.

The alert began after an earthquake at 1h04 on Thursday morning (March 18), measuring 5.9 on the Richter scale, near the Algerian town of Bejaïa, 700km from the French coast.

Yannick Ferrand, director of risk prevention in the city of Cannes, tweeted that the earthquake had prompted a “yellow” warning for a tsunami on the northern Mediterranean coast, towards the Var and Côte d’Azur.

Yet, the impact was less severe than feared, with the alert lifted in France at 4h25, with no damage reported.

Some damage was reported in Algeria but there were no casualties.

It comes after Cannes began installing tsunami alert warnings in the city - including stickers on the ground directing people to “tsunami evacuation areas” - in August 2020. It was the first city in France to do so.

At the time, Mayor David Lisnard told news service 20 Minutes: “The risk does exist. An underwater earth movement near the Algerian coast can cause three-metre-high waves here.”

And Mr Ferrand said: “A map will be established so that everyone knows where they are [above sea level] in each zone.”

He explained that evacuation areas had been established from the Vieux-Port de Cannes towards the SNCF train station in the city centre. The Le Suquet area of the town - one of the oldest and highest parts of Cannes - also features as one of the “recommended zones”.

The city organised a trial evacuation in 2018, to test its response in case of a real tsunami.

Mr Lisnard said: “According to specialists, an undersea earthquake could cause a devastating wave for the coast, especially as it would include whirlpool currents. People on the beaches, but also sailors in the harbour, would be on the front line.”

On October 16 1979, the Côte d’Azur was hit by a tsunami wave caused by subsidence at a construction site near Nice airport, which killed 11 people.

Laurie Boschetti, an expert at the Geoazur lab, explained to 20 Minutes that the Côte d’Azur was vulnerable due to the Ligurian fault system, which sits around 20-30km from the coastline.

It extends 80km towards Italy. If this fault ruptured completely, it could cause waves of up to four metres high, she said.

Ms Boschetti has also studied the tsunami of February 23, 1887, which happened due to seismic activity. It caused damage between Genoa in Italy and Menton in France, even though the wave itself only reached one metre in height.