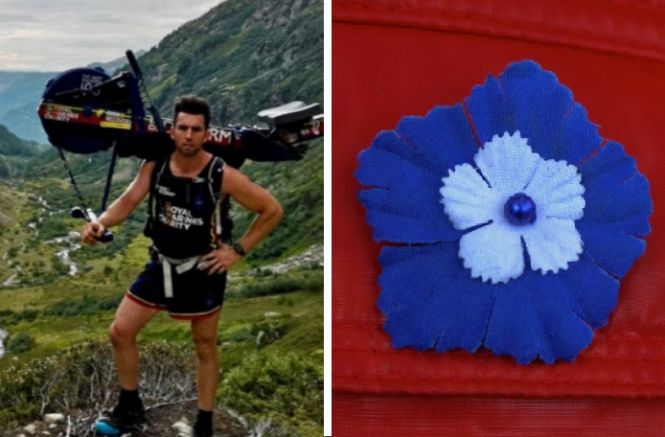 The failed stunt by a former British Commando (L) has led to a donation to the Bleuet de France charity, known for selling fundraising "bleuet" cornflowers, such as this one from 2012 (R)
By Connexion journalist

The donation will be made on the symbolic date of November 11, as part of a memorial to mark the end of World War One, in Saint-Gervais (Haute-Savoie, Auvergne-Rhône-Alpes).

The donation will be from The Royal Marines Charity, made to the Bleuet de France charity, which supports French veterans.

Saint-Gervais is a commune near Mont-Blanc, whose mayor Jean-Marc Peillex wrote to President Emmanuel Macron in September to ask him to tighten restrictions for climbers on Mont-Blanc, after former Commando Matthew Disney scaled the mountain with his rowing machine, but failed to bring it back down.

Mr Disney had been raising awareness for two UK armed forces and military veterans’ charities - Rock 2 Recovery and the Royal Marines Charity - and had already raised more than £15,000 (€16,425) at the time.

His plan had been to climb Mont-Blanc while carrying the awkwardly-shaped, 26 kilogram, 2.5 metre-long rowing machine up solo, and to row on the summit; before bringing the machine back down.

He had successfully performed similar mountain stunts before, including on the three highest peaks in Scotland, Wales, and England (commonly known as the “Three Peaks” challenge).

But the former Commando said he had became exhausted on the descent from Mont-Blanc, and was forced to abandon the rowing machine in the Vallot Refuge Hut area, which is at an altitude of 4,362 metres.

This prompted mayor Mr Peillex to object, and in addition to his letter to the President, he also wrote to the ambassador to Great Britain to ask that he pay the €1,800 projected cost of bringing the abandoned machine down by helicopter.

Mayor Mr Peillex called the donation “an intelligent end note” to the debacle. He also confirmed that the money would in fact go straight to the Bleuet de France charity, and would not be used to pay for the rowing machine to be brought down.

The machine has already been recovered by mountain emergency team the Peloton de Gendarmerie de Haute Montagne (PGHM) de Chamonix-Mont-Blanc, who went to pick it up during one of their missions.

It is now being held by the Chamonix police.

Mr Peillex said the machine would be given back to Mr Disney if he “answers his court summons”, but, the mayor added: “We are still waiting to hear from him.”