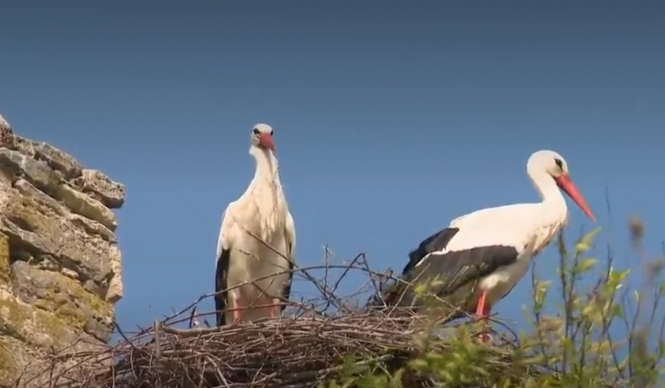 The rundown Château de la Rivière de Saint-Fromond (Manche, Normandy), which was built in the 13th century by the family of William the Conqueror, now has almost 200 birds making it their home.

The property is surrounded by 30,000 hectares of marshes, which are inhabited by frogs, insects and rodents; perfect food sources for the storks.

Guillaume Hédouin, manager of the Contentin and Bessin natural park marshes, said: “Storks can eat rodents, they can also eat amphibians. They have very diverse food sources - if it moves, they will not hesitate to eat it. They are very greedy.”

Visitors to the ruins have more recently been coming to watch the storks, rather than appreciate the history of the building itself.

As well as its links to the Normans, the chateau was also taken over by the Germans in World War Two, who used it as a storehouse for their weapons, before destroying it when they had finished.

Storks are a protected species, meaning that it is illegal to hunt them. This behaviour - flocking together in a ruin - is not seen as common in France.

Ornithologist and birdwatcher Alain Chartier said: “In Spain, it is quite common to see storks in churches and on ruins, but in France, it is very rare.”