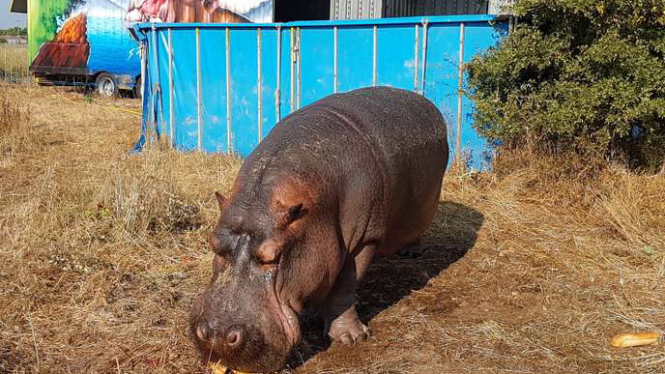 According to the One Voice association, which reported the Muller circus to the police, a hippo called Jumbo is being maltreated and kept in conditions that can cause suffering.

It says the case of the hippo is emblematic because these animals have such specialised needs, which, in French law are stated to include warm conditions, plenty of space and access to a heated swimming pool.

One Voice tried, but failed, via a case in the administrative courts, to get the circus's permission to keep the hippo for shows removed.

Today’s case in Valence, Drôme, is a criminal prosecution it sought in parallel. Officals that visited the circus found evidence there may be non-conformity with the rules.

Unlike many other European countries the use of ‘wild’ animals in circuses (ie. non-domesticated species like lions and bears, many of which are born in captivity) is allowed in France, angering many animal lovers who say the circus environment is unsuited to their well-being; however ‘traditional’ circuses using the animals claim high French standards make the practice acceptable.

Talks have been ongoing between circuses, activists and the government.

French law says animals used in travelling shows must be kept in conditions that meet their biological and behavioural needs and guarantee their safety, well-being and health.

“We’ve focussed on Jumbo as a priority because its suffering is greater than other wild animals held in circuses,” One Voice founder and president Muriel Arnal told Le Monde.

She said the hippo, because of its bulk, should spend most of its time submerged to support its joints, but Jumbo is “never in his pool”. The French rules say hippos need constant access to a pool, at least at 22C, 30m2 and 1.5m deep, apart from during transport.

One Voice says its investigations during two years found Jumbo was kept in a truck and only let out for half an hour a day.

However the circus’s lawyer said: “No one can observe for 24 hours a day for two years and Jumbo has, obviously, access to a pool.

“The only thing One Voice has really got against the circus is that the hippo isn’t in its natural surroundings. Well of course it isn’t, but that doesn’t mean it’s maltreated or tortured.

“They’re using the animal as a mascot for a political campaign but they have never sent a vet to examine it.”

This comes as there has also been controversy over the conditions in which bears and other animals used in shows around France have been held by a couple of animal trainers, the Poliakovs.

A bear, Micha, was removed from the couple for treatment at an animal refuge after being found to be suffering from serious health conditions, and died shortly afterwards.

It was underweight, had maggots in its nose and feet, breathing difficulties and neck problems possibly linked to wearing a chain around the neck and parts of its feet were rotting.

Now Le Figaro reports that an autopsy showed it was suffering not only from problems linked to poor conditions and neglect, including lung conditions from rust in the enclosure, but also evidence of large inflamed bumps suggestive of repeated blows to its cheek and behind.

Two other bears held by the Poliakovs have now been taken to a refuge for care after being found to be suffering problems including painful dental decay and a cancerous eye tumour.

“He had a horrible, horrible life. And it’s important we help the other animals now.

“He spent ten years in a truck, living in a tiny cage, moving around and only let out for the show.”

She added: “After he was rescued he spent the last two months surrounded by people who cared for him. That was the first time in his life.

“What’s cruel about circuses for animals is that they move around.

“These animals are kept in trucks, in tiny cages, because they move from town to town.

“In these cages they have nowhere to hide.

“These are wild animals. They are very afraid of people.”

Training methods can also be cruel, she said. “It’s a tradition from very long ago and it should end now.”

In a previous Connexion interview however, Christian Caffy, of the Fédération des Cirques de Tradition, said a total ban on wild animals in travelling shows could cause the loss of 3,000 jobs and he claimed many animals would probably be euthanised as it is unlikely that refuge places would be found for all the animals to live out their lives.

It is also not possible to release animals used to living with humans into the wild, he said.

The government is reported to have met again in recent days with circus owners, who spoke of the ‘difficult economic context’.

The government is expected to make an announcement before the end of the year regarding the welfare of circus animals. It may however involve further safeguards rather than a ban.

Ms Arnal compared the progress of the cases in France to those in England where a total ban is finally expected early next year.

“It was very difficult especially compared to England where they see a problem and act quickly.

“That’s not to say there are no animals suffering in England but here in France we are just banging on the wall.”

"England has always been an inspiration for us in our battle for animals.

"They have been a long way ahead of us and it was a big celebration when they confirmed the total ban."