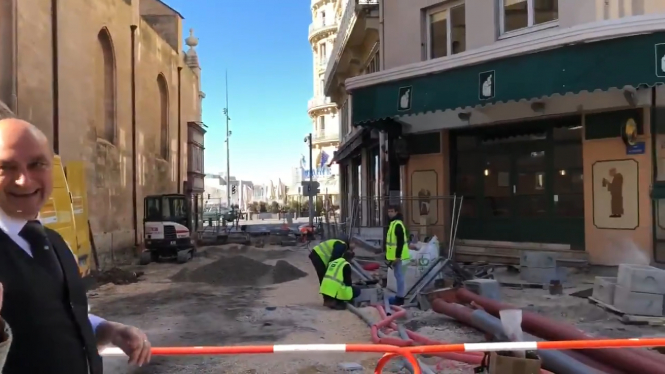 Work is already underway in the city centre, with the first phase of the project expected to be complete by this summer
By Connexion journalist

The pedestrianisation will cover 72 hectares in total, at a cost of €60 million, paid for by the departmental council and authorities La métropole d’Aix-Marseille Provence.

The project is part of a wider plan to improve transport links around the city too.

Martine Vassal, president of the greater Marseille area, has assured residents that local taxes will not rise as a result.

The plan will also see the planting of 450 trees in the very town centre, and the renovation of certain street surfaces. Some bus routes will be diverted around the new pedestrian zones, including the lines 81 and 41.

Parking spaces above ground will be reduced too, with city authorities set to introduce a new system for local residents and shoppers.

Those who live in the centre, or who are visiting to use the shops, will be permitted to park using new low-cost tariffs across 20 nearby underground car parks.

According to Ms Vassal, these will start at €1 per day, and will allow residents to park cars there all night from 20h to 8h, and at weekends. The tariff will rise to €2 per day to park all day and night. Shoppers will receive the first half hour of parking free.

The first phase of the plans is set to be finished by next summer.

The overall aim is to boost visitor numbers in the town centre, improve the quality of the public space, and push up sales in local shops.

Yet, some residents and business people in the city centre have said that the Mairie has been less-than-communicative over the extent of the planned changes. Despite the new parking arrangements, some have raised concerns over future parking difficulties near their homes.

One local said: “We do not know what is happening; we have not been kept undated. There has been no communication from the Mairie. We would like to know what they are going to do, because we want clients. And right now there are none in the town centre.”

Another local retired man, who has lived in the town centre for 40 years, told Ms Vassal: “When I moved here, there were 40 parking spaces. Now, there are five, and in the evenings I have to park on a non-authorised space, and rush to move [the car] in the mornings.”

Yet, Ms Vassal defended the plans. She said: “The town centre of Marseille has deteriorated. We have consulted associations [on this], especially business associations. They say that business is down 20%. The consultation took place, and everyone is free to take part.

“We must now carry out this work as quickly as possible.”