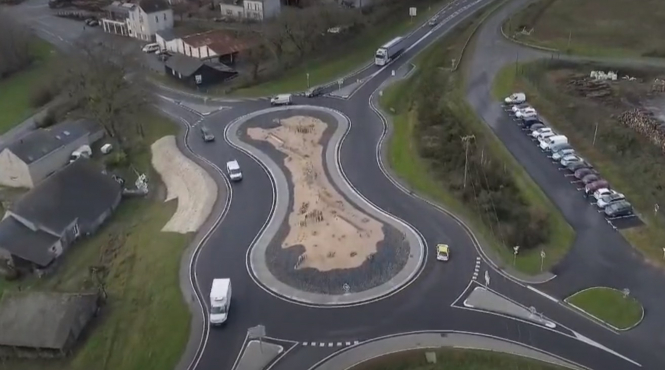 The roundabout - which some are also calling “bean-shaped” - is located in Nozay, between the cities of Nantes (Loire-Atlantique, Pays de la Loire) and Rennes (Ille-et-Vilaine, Brittany).

It cost €720,000 to build - a competitive price compared to “normal”, circular junctions, according to the local council - and has replaced an old crossroads, which was criticised for being too narrow, and having very poor visibility.

The novel shape is designed to slow vehicles down and make the junction safer, while also being easy and smooth to use.

One local truck driver told public news provider FranceInfo: “It seems nice, rather pretty. Not bad to use. I see no issues.”

Another motorist said: “At least it makes you slow down. Because there are people who drive very quickly, and this helps you to go slower.”

Bruno Gorrée, manager at local sawmill Bourdaud Bois, explained that the new roundabout was much safer for lorries, with better visibility and ease of use.

He said: “Our lorries are 15-16 metres long, and when they approached the [old] busy crossing during times of fog or heavy rain, it was a little like playing Russian Roulette.”

A lorry driver said: “We found it tough to keep in, and as a driver, it was quite difficult. There were several accidents with cars.”

The "roundabout" shape has been likened to a peanut or a bean (Photo: FranceInfo / Screenshot)

The roundabout capital of France

The Loire-Atlantique department has the highest number of roundabouts and major crossings in France, at 3,000 - including 1,100 in central Nantes alone.

These include regular, circular ones; square or rectangular ones with rounded corners; double-lane junctions; and even a “hidden” spiral entrance to an underground car park accessed at the centre of an otherwise-normal roundabout.

This tradition goes back to the 1980s, when local engineer and town planner Yann Le Gal visited the UK, and was inspired to bring elements of its road system back to France with him. Roundabouts are lauded for being safer, cheaper to maintain, and improving traffic flow, when compared to red-light-controlled crossings.

Road accidents in city-centre Nantes have halved in number since the 1980s, which is thought to be partly due to the increased numbers of roundabouts.

In central Nantes, a cyclist said: “Roundabouts work better than red lights [at crossings]. Cars pay more attention when they’re on a roundabout; they go slower.”