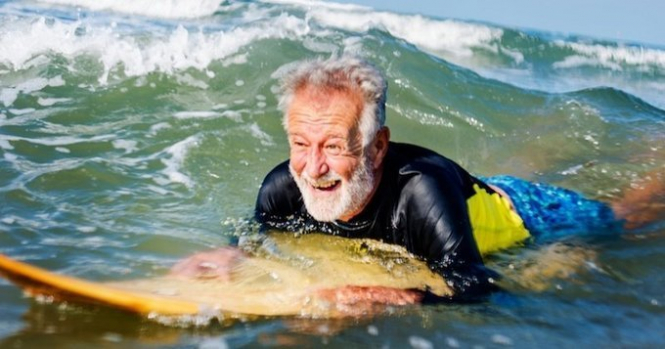 The Ehpad (elderly care home) in Dol-de-Bretagne (Ille-et-Vilaine) now offers the sport to its residents, many of whom have eagerly taken part.

“Surf therapy” requires participants to lie forward on their boards, rather than stand - and seeks to encourage confidence, agility, and wellbeing.

One participant, 83-year-old Marie-Anne, who has done three sessions, told FranceInfo: “I told my grand-children that I was going surfing. They asked: ‘Are you joking, grandma?’.

“I didn’t even know about it [before]. I had seen it on TV, but for me, it didn’t seem possible. I did not think I would be doing this at my age.”

The sessions begin with a short and gentle jogging warm-up, and a quick demonstration, before taking to the waves.

Due to conditions on the northern coast, wetsuits must be worn - which, the surfers say, can be challenging enough in themselves, even before any surfing begins.

Christiane, one of the residents taking part, said: “The wetsuits are good, but difficult to put on.”

Surf therapy leader Hélène Rouault said that the surfing sessions allow the residents to feel more alive. Being in the water also helps them to forget their troubles, and aches and pains, she explained.

Ms Rouault said: “It is about proving to themselves that they are not ‘at the end of their lives’. It’s about saying: ‘I still have things to do. I’m going to be able to share this with my grand-children...They have done something a bit extraordinary. It is about going above and beyond yourself.

“I see their faces light up, and it is just magical. I see it, no matter who they are. Andrée is not very communicative [normally], but as soon as we start, she starts laughing, talking, saying ‘Let’s go back!’”

Resident Marie-Anne added: “It’s super. I would happily do this everyday. I would stay here all afternoon.”

Care home health manager Sonia Baudry, believes that the surfing therapy lessons “transform” the elderly people. She said: “We really feel a sense of calm after these sessions. They feel good.”