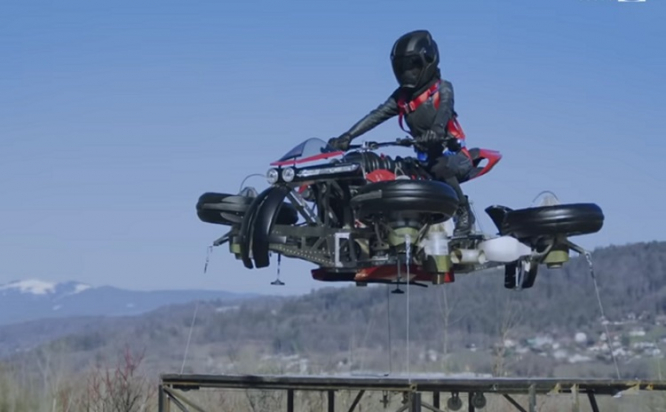 Believe your eyes... that is a flying motorbike that takes to both road and air –although civil aviation rules stop it from flying higher than 10 metres.

The LMV496 is the creation of inventor and engineer Ludovic Lazareth who has also built an amphibious car (‘because Lake Annecy roads are crowded’) and a V8 motorbike (well, just because...).

Ludovic said: “At the moment, we cannot fly in ‘free air’ as it is against DGAC civil aviation regulations.

“Our first tests needed a ground tether to stop it flying away from us but the cage lets us progress.

It now flies stable with the turbines, with or without a pilot on board, as it flies by remote control.

“Jet turbines power the flight and it has an electric motor for road use. Range is very limited  – it is very dependent on weight – so, about 10 minutes flying.

“It took a year to get this far. We’re selling these models for €496,000 and have sold three: two to Americans and a third to a Malaysian [‘Drivers’ need a motorbike licence and a microlight licence (ULM)].

“It runs well and I took it out for a short road test – we only had enough power for about 300m – for a video.

“Obviously, the flying rules meant we couldn’t do proper shots of the bike flying but in our garage yard we worked in the cage to take a video of it flying with no support or tethers.” The Lazareth Moto Volante is like its V8 sister bike LM847, with its Lamborghini engine and four wheels, but the engine space hides a fuel tank and electric motor. Its turbines give 1,300hp for 2,800N of thrust.

Five will be built, but Ludovic , of Annecy-le-Vieux, and his team have turned to other projects until they can get new and better turbines. “We need about €300,000 to do what we need to do and we have approval for tests on a military airfield when we have the new, more powerful turbines.

“We are still building motorbikes and our amphibious car, which is used on Lake Annecy. We have sold 10 so far, at €30,000.

“My next project? Well, I’m planning a road-going submarine... It’s not going to go deep, just a couple of metres, but it’s fun!”