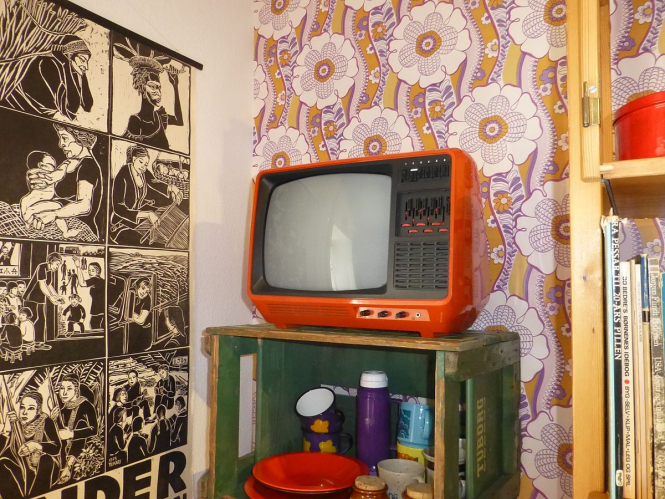 The family's home was transformed into a 1970s style house including black-and-white TV (photo shows the 1970s museum in Odense, Denmark)
By Connexion journalist

“La famille à remonter dans le temps: Destination 70” TV show saw husband and wife Alain and Emmanuelle, and their three children, Pauline, Clara and Lucie, move into a rented house for four months, while the production team prepared their own family home for a travel through time.

The garage became the dining room, the kitchen was moved round, the French doors to the garden were removed, and the shower rooms were halved in size.

A year ago, the family took part in the same programme but set in the 80s, and this year’s show saw everything change again for the 70s.

The new interior design reflected the bold colours of the decade, such as orange and brown together, and the family also had to grapple with 70s technology such as a dial phone, a standing vacuum cleaner, and a hair-dryer with an inflatable helmet. A black-and-white television showed authentic programmes from the decade, but only had two channels.

The family was also given a vintage 2 CV Citroën car, without seatbelts, as it would have been in the 70s, and themselves given a new wardrobe of 70s clothes.

Mother Emmanuelle was dismayed to see there was no washing machine or dishwasher and that she would be expected to do their tasks instead, while father Alain was especially excited by a ‘Merlin’ toy, which was a pioneering and then-ahead-of-its-time electronic game from the era.

The family experienced several events and trends of the decade, including the lessening of formal manners, and now-outdated practices such as seeing topless women on sports TV programmes, as well as challenges including the power and water cuts that affected the country in 1976.

In France in the 1970s, according to newspaper Le Figaro, half of residents did not have a bathroom in their house, and one in ten did not even have any running water. Only 38% of women and 22% of men were said to wash at least once a day.

However, even though televisions cost twice the average monthly wage, thousands were sold during the decade as the popularity of watching grew.

“The rumour going round the village was that my parents were getting divorced, and they were dividing up the furniture,” said 18-year-old daughter Pauline, speaking to Le Figaro about the TV filming process.

“But I have good memories of the filming. I enjoyed the vintage style, and the board games helped bring me closer to my sisters. However, I didn’t like expectations on women to be ‘the maid’, the gender relations between men and women, or any of the food cooked in jelly.”

The “La famille a remonter dans le temps” concept is similar to two BBC TV programmes in the UK, named ‘Back in Time for Dinner’ and 'Further Back in Time for Dinner', which saw the Robshaw family home in London redecorated and changed as the family experienced life - and especially food and drink - decade by decade throughout the 20th century.

This included dealing with wartime shortages, the politics of using servants, questions about gender roles, working outside the home, and changes in shopping habits.