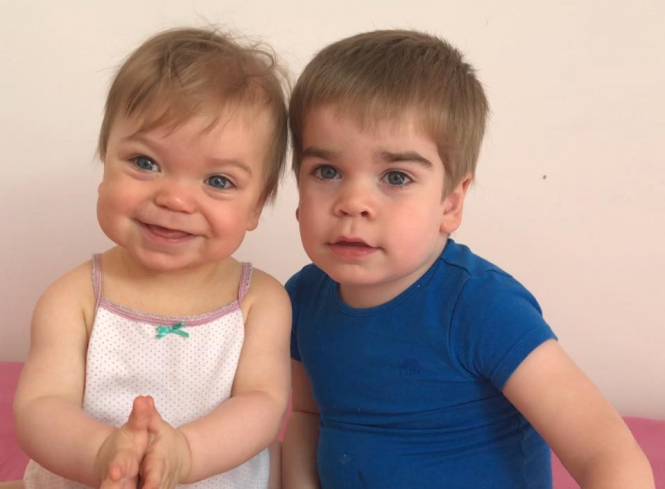 Hugo and Emma - aged 3, and 10 months - both suffer from the rare neurological condition
By Connexion journalist

Julien and Alicia Mercier from Aulnay-sous-Bois (Seine-Saint-Denis) are parents to Hugo and Emma, who are aged three, and 10 months respectively.

Both of the children suffer from the very rare, genetic neurological condition, Sanfilippo type B.

At the time of writing, the parents have raised €124,626 from 2,322 contributors online in one month, but are aiming to boost further awareness via their Facebook Page, and have just under three months to reach their target.

Just 92 days remain until the online crowdfunding deadline, by which time the total must be reached, or the couple will receive nothing.

Mrs Mercier said: “We are very grateful already, but the fight continues. We are far from the total but we know we can get there.”

Just two or three children a year in France are thought to be born with Sanfilippo B, for which no definitive cure currently exists outside of experimental trials.

The condition causes parts of the brain - the “lysosomes”, which are known as the cell “recyclers” that keep cells working correctly - to malfunction, causing a slow loss of neurological ability, handicapping, and early death at around age 20.

Children with the condition will seem normal until around age two or three, when problems in their development will begin to appear.

Mr and Mrs Mercier first noticed issues with their eldest child last November, and have since learned that both children are affected with condition.

Now, a new medical trial has been offered, which could, the parents say, help stop the condition from developing further in Hugo, and allow Emma to develop almost-normally.

A similar trial took place in 2013, with “encouraging results”, the couple has explained.

The experimental procedure involved includes injecting modified genes into the brain and by intravenous drip. Such clinical trials are more likely to work when the patients are young, the parents have said.

Today, Hugo cannot speak, and communicates with his family using a form of sign language. Without the trial, the parents fear that Emma could develop the same issues.

The family is supported by the condition’s association, Vaincre les Maladies Lysosomales (VML), in their quest to secure the trial, but still need to raise well over €3m.

Mr Mercier said: “[The clinical trial] is a comforting idea, and we hope to improve our chances [but] raising the finance is a real race against time. Hugo and Emma have a pendulum hanging over their heads. We are trying to make the most of our time with them, but time is short.”