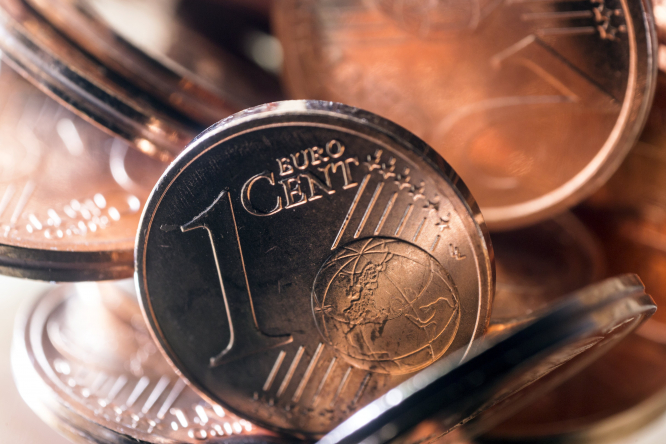 The EU has been working on the issue of the possible abolition of one and two centime coins for many years, though a decision has yet to be made. Pic: silvestrinis / Shutterstock

More than half (52%) of adults polled in an Ifop study think abolition of one and two centime coins would cause prices of everyday goods to be rounded up.

In another finding, 51% said they would like the coins to remain, in the poll for the Monnaie de Paris mint.

It comes as a second poll found the French are increasingly struggling to save.

The EU has been working on the issue of the possible abolition of one and two centime coins for many years, though a decision has yet to be made.

Predictably the majority of regular users of the small change say they are against its abolition (54%), but equally, many people who are more used to ‘dematerialised’ means of payments, such as contactless cards, also appreciate their small coins with 42% being against the plan.

Money as a ‘vector of social cohesion’

He added: “The study also shows that cash is perceived not only as practical and easy to use, but  also as a vector of social cohesion,"

While those polled by Ifop saw more negative consequences than positive as likely to result from the coins’ removal, some 60% of those polled believed the move would be “more ecological”.

France’s general opinion on the coins contradicts the results of the European Commission's own public consultation for which 17,000 people from 19 EU countries expressed their views.

The results, published in May 2021, show that seven out of 10 people think they should be abolished.

Concerning cash payments in general, they are also favoured by people in France.  It is the payment method that generates the most confidence and 91% of consumers use notes and coins more or less regularly.

Fears in France of prices increases come in a context in which some 75% of people in another recent poll said they feel their spending power has dropped this year.

Other arguments put forward are that it would penalise the poorest, limit donations of small sums during initiatives such as the Opération Pièces jaunes (a scheme collecting spare cash to help children in hospital), or even herald the eventual abolition of coins and cash generally.

Fewer people in France are able to save money

At the end of the month, once the main expenses are over (rent, water, electricity, gas or internet bills, food shopping, etc.), only 39% of French people are able to save, according to another Ifop survey**, this time for Le Journal du Dimanche.

The Ifop study shows that the ability to save is linked to standard of living.

A greater capacity to save among the under-35s

Fewer women than men say they are able to save, with 31% and 47% respectively. Disparities also exist according to age. More people under 35 years of age put money aside (45%) than those aged 35 and over (36%). This saving capacity can be explained by lower expenses: No mortgage, children, etc.

According to Ifop, the typical French person who is most willing to save at the end of the month is a man under 35, who is wellk-off and votes on the right.

The decline in the French capacity to save may have several reasons, notably accelerating consumption as the country emerges from Covid restrictions.

However above all it indicates that France is experiencing an impoverishment of a part of its population.

*Quantitative study conducted among a sample of 1001 individuals, representative of the French population aged 18 and over. Interviews conducted by self-administered online questionnaire from March 24 to 31, 2021

**Survey conducted among a sample of 1003 individuals, representative of the French population aged 18 and over. Interviews conducted by self-administered online questionnaire from October 19 to 20, 2021

'Card only': Can shops in France refuse cash payments due to Covid?