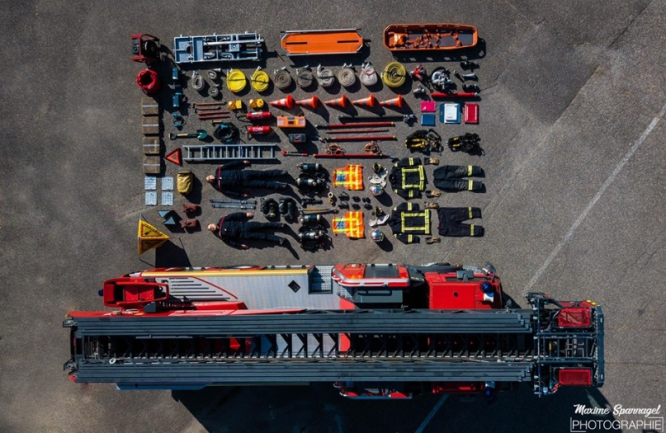 The challenge - which is named after the 90s computer game Tetris, which asks users to tessellate different-shaped blocks as closely as possible - has spread across social media, using the hashtag #TetrisChallenge.

It asks users to lay out their possessions - as neatly and tessellated as possible, exactly as in Tetris - and then take a birds-eye-view photo from above.

The latest photo from the fire brigade in Wittenheim (Haut-Rhin, Grand Est) also shows two firefighters themselves lying down to become part of the “set”.

This style of photo is often known online as a “flatlay”. They can also have the appearance of children’s games or flat-pack furniture, which often come with instruction booklets showing diagrams of each piece or object included inside.

The Wittenheim police posted their effort on Facebook, and claimed to be the “first to do it on [such a] large scale”.

The station explained that the photo took half a day to plan and complete - in order to find a good place to do it, and to perfect the drone shot.

Maxime Spannagel, firefighter at Wittenheim, and the photographer of the final shots, said: “We know what we have in our vehicles, but we didn’t expect it to take up so much space. Even we were impressed. We did it by eye, without measuring, and the result is not bad.”

The challenge has spread among emergency services in France.

The fire brigade of Mazières/St Pardoux (Charente,  ‎Nouvelle-Aquitaine) also posted a similar photo, as did a team of gendarmes from Val-d’Oise (Île-de-France), and the French Police Nationale.

The craze has also spread internationally, with emergency teams from countries including Switzerland, China, the Netherlands, the UK, and even as far as Taiwan, Singapore, and South Africa, taking part.

Ever wondered what we carry on one of our Fire Engines?

Well here it is... our attempt at the #TetrisChallenge #FeelGoodFriday pic.twitter.com/RjctBPUpsS

Absolutely loving the #tetrischallenge this morning. A few of my faves attached. Hoping @metpoliceuk @LondonFire @LAS_HART @RNLI are busy working on theirs! Making the world feel a bit closer together - the internet at its finest??? pic.twitter.com/KdYDNZBXjF

The #Taichung City Police Bureau took part in the viral 'tetris challenge' - using flat-lay photography to display the tools of their work. They were joined by other emergency services from around the world including in Switzerland South Africa #CulturalTaiwan #TetrisChallenge pic.twitter.com/54RNGn4gFk