French firefighters help design own watch to save vital time 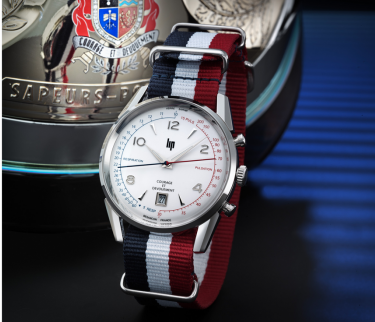 When firefighters wanted to gain vital seconds while checking victims, they thought of designing a special watch – and called the French watchmaker Lip, known for its work with Pierre and Marie Curie to create phosphorescent watch faces.

The firm, based in Besançon, worked with the pompiers on a design that shaves the time needed to deal with patients.

A mix of innovative and traditional techniques

It is both innovative – with new hands to help measure pulse and breathing – and old-fangled, with a “mechanical” movement and a design that dates from the 1950s.

They based it on Lip’s Himalaya model, which was designed with Maurice Herzog, the first person to climb Annapurna. It has two extra hands, one on the left and one on the right, to give a quick reading for both pulse and breathing rate.

Pierre-Alain Bérard, of the family firm SMB which owns the Lip brand, said: “All the rescue service person has to do is to start with the pulse option by pushing a button, count 15 pulses, and then push a button to get the number of heart beats per minute.

“Then they can do the same with the breathing hand with five breaths, to get the number of breaths per minute. These are the two key determinants used to evaluate quickly how serious the patient’s condition is.”

Having an old-style watch with hands and a mechanical movement – albeit driven by a battery-powered quartz motor rather than clockwork – can appear strange in this day of electronic devices ready to do everything from taking your temperature to ordering the family’s weekly shop.

However, Mr Bérard said sapeur-pompier vehicles usually have around 30kg of backpacks with electrocardiograms and defibrillators, and these would often be taken out to assess the patients when there was no need. Repeatedly taking packs in and out of the vehicle was not only hard on the pompiers, but also affected the reliability of some of the equipment.

“Having a watch, something which is light, which you wear all the time, with a simple mechanism which does not involve having to switch on a telephone, find an app and then hope you have a signal and battery, seemed a good idea, and once it was designed, it has proved itself,” Mr Bérard said.

Designers and engineers spent a year perfecting the watch

Called Courage, the stainless steel, waterproof and hardened-glass watch tells the time, has the date, and has the pompier motto of Courage et Dévouement written on the face. Bracelets are either a blue, white and red strap, or a blue rubber diver’s model.

Rescue service personnel can buy a discounted version on the pompier association website and it is for public sale on the Lip website – lip.fr/en – for €279. Each watch is made to order.

Once France’s best-known watchmaker, the company made everyday models as well as luxury ones rivalling famous Swiss brands.

Owners from Winston Churchill and Charles de Gaulle to former prime minister Edouard Philippe have worn Lip watches. It was chosen by the postwar French government to create a gold model in 1948 as a thank-you to Churchill for his efforts.

Variations of this, with its rectangular, art deco-inspired design, are still a bestseller, with prices at €180-€259.

Mr Bérard said: “Obviously, the company was proud to be chosen, but they were also commercially minded enough to secure the rights to use the Churchill name for the watch, and it has been very popular ever since.”

The Général De Gaulle GDG model – one of the first with an electronic movement – was given to De Gaulle and General Eisenhower, earning the nickname “the presidents’ watch”.

Founded in 1867, Lip was run by the Lipmann family in the heart of the French watchmaking industry in Besançon, Doubs. In 1904, it asked Pierre and Marie Curie for help in designing a phosphorescent face, just after the discovery of radium.