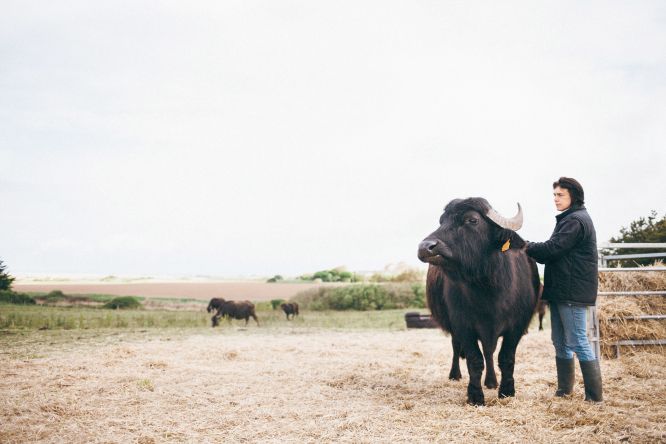 Farmer Marisa Thomas with one of her bufflonnes
By Connexion journalist

Marisa Thomas from Chèvrerie de la Baie in Tréguennec now has 35 female buffaloes (bufflonnes) as well as her goats, which include rare breed animals called chèvre des fossés. She has called her cheese Mozza Breizh.

She said: “The idea came to me bit by bit because customers asked for it. I did a little course but making it is far easier said than done.

“Seven years later and without going to Italy and after lots of failed batches, and getting to know the milk of my buffaloes, I’ve found the right technique.”

Buffalo milk is the traditional ingredient for mozzarella, although cheaper versions are found outside Italy made from cows’ milk. She uses 55 litres of milk a day to make 10 kilos of cheese and has now bought a farm in Con­carneau so she can expand. Later she plans to try making camembert and a burrata and she wants to open a shop at the farm early next year (for more information see chevrerie-delabaie.com).

Surprisingly, despite centuries of cattle farming Brittany is not known for cheese and, like neighbouring Pays-de-la-Loire, boasts no prestigious AOP brands. However, it does have some quirky varieties such as tome de la mer, made with three seaweeds, perle noire - black, with squid ink - a green one with spirulina le galet céladon, and le menhir, a little grey knobbly cheese that looks like a standing stone.