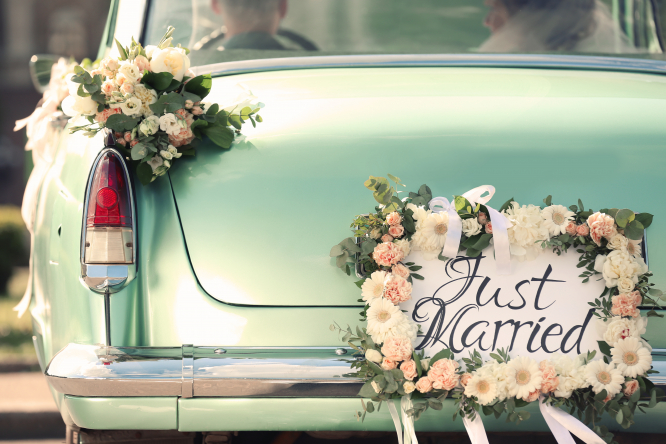 The deposit is part of a series of new rules introduced by the Mairie to reduce the risk of destructive wedding parties and ceremonies Pic: Africa Studio / Shutterstock

A town in northern France is set to require couples getting married to pay a deposit of €1,000 to the mairie, after three recent ceremonies degenerated into violence and destruction.

Karl Olive, mayor of Poissy in Yvelines, Ile-de-France, told Europe 1 that the measure was aiming to avoid “this day of celebration becoming a day of damage”. He called on other mayors to follow suit.

He said he was about to vote in the deposit, which would be made up of €400 for any hours of ceremony delays, €500 for any eventual damage, and €100 for clean-up.

Mr Olive said that he recognised that only a tiny minority would see their deposit used, but said that the measure was “win-win”.

He said: “I am a fervent defender of the reciprocity between rights and responsibilities. To this end, when weddings take place in our beautiful rooms, I consider that at the very least, there should be no bad behaviour inside the hôtel de ville.”

It comes after three weddings caused significant problems in recent weeks. Mr Olive said that there had been severe delays caused, public officials mocked during ceremonies, elected representatives being insulted and projectiles being thrown inside the town hall.

He added that four people had also been taken into police custody three weeks ago after guests attacked a municipal official who was asking for calm in order to make the union official.

In response, as well as the new €1,000 deposit, the mairie is also set to ensure armed police with body cameras will be present during ceremonies, and the capacity inside will be lowered from 99 people to 50.

Mr Olive said: “We want marriage to stay a happy day, and not become a bad one for my civil servants.”

Other out-of-control weddings have hit headlines in France in recent years and months.

In September 2020, in Bron near Lyon, several people were arrested after ‘urban rodeos’ took place in the town, and there were clashes between police and guests after the mairie asked that the number of people in the party be reduced.

More recently, in Nice, a 19-year-old man died after a speeding wedding party vehicle collided with a parked truck; and in September this year, a wedding party in Mery-sur-Oise attacked gendarmerie officers after they intervened in a marriage convoy that was blocking traffic.

Also in September, a wedding procession in southeast France was fined €8,370 for excess beeping and breaking the highway code.

As a result, many more communes are asking wedding parties to sign “good behaviour charters” before ceremonies take place, as a way of reducing the risk of public order problems.