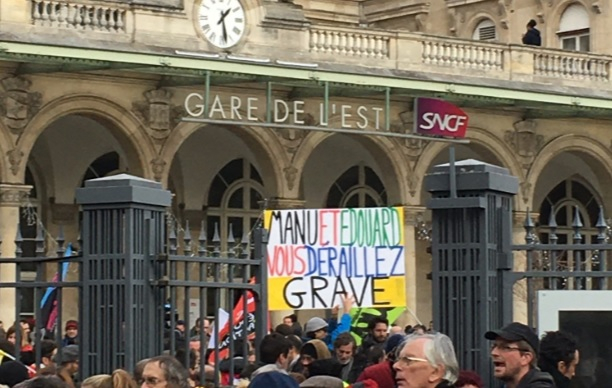 Train company SNCF has announced what it called a “strong plan” for December 27-29, as many people return from their Christmas holidays.

TGV services have improved significantly, with 60% of trains scheduled to run. SNCF has put 1,300 TGV and Intercités into service; 20% more than the amount running over the first holiday weekend of the season last week.

Around 40% of TER trains are running, as are 20% of Transilien. In Paris, RER services are severely disrupted, as are RATP metro lines, but the Orlyval and Roissyval airport shuttles are scheduled to run normally all day.

Eurostar is still running a "reduced timetable" until December 31, and departure times for its Ski Train services to the French Alps have changed.

The disruption marks the 23rd day of transport worker strikes against the government’s pension reform, with transport staff having marching on Paris yesterday (Thursday December 26) and unions calling for a further day of action on January 9.

The action has now lasted longer than the major pension strikes of 1995.

Yet, several professions have managed to win concessions and agreements.

President Emmanuel Macron has suggested that the military will not be affected by the proposed retirement system. Currently, there is no legal minimum age for retirement from the military, and only the length of service is taken into account.

Most can receive a pension after 17 years of service, and the average age of retirement for rank and file military is 41.

But, in a speech made to French troops in the Cote d’Ivoire, Mr Macron said: “When you are in the military, you do not ‘retire’, you get a pension. It is different.”

On December 11, Prime Minister Edouard Philippe said: “I want to first confirm to our interior security forces that those who are involved in dangerous work in the context of missions, such as firefighters, police officers, gendarmeries, prison officers, [and] soldiers, will retain their age exemption.”

These professions will continue to have the right to take their pension from age 52 for police, including for prison workers, and air traffic controllers.

Mr Phillipe has said that fishermen will retain their special status; currently they can retire from age 55, after 37.5 years of contributions, on sea and land.

The government has said that truck drivers will retain their current system, which allows them to stop working from age 57, and continue to receive 75% of their gross salary until the age of 62, when their final pension comes in.

Air stewards have withdrawn their calls to strike after the government confirmed that the profession would be able to maintain access to its current, independent retirement fund, which is worth €5 billion.

Pilots have received confirmation that they will continue to be able to leave at the age of 60, and to keep their current pension system.

Although the strikes continue, train and transport staff have achieved some concessions.

On December 18-19, the government said that it would only introduce the new system for those born after 1985 or 1980, depending on their role. Similarly, it has been confirmed that the new system will take into account their end-of-career salary, and not that of 2025, as had previously been suggested.

There have also been further concessions, including assurances in compensation for the increased age of retirement.