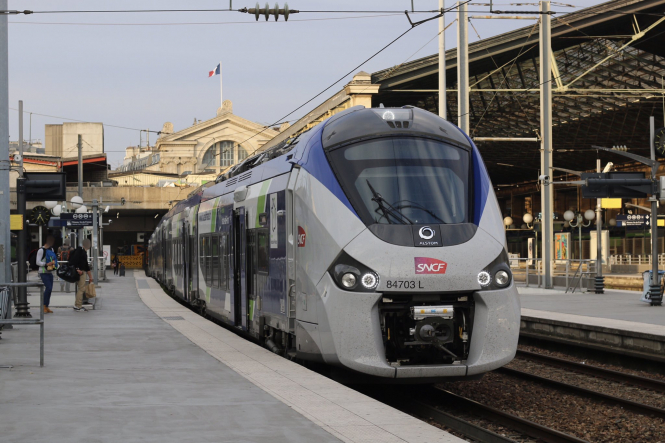 Where new barriers have been installed, only passengers with tickets are allowed onto the platforms
By Connexion journalist

The furore began after one man, 36-year-old Jonas, arrived at the Gare de Lyon in Paris on Saturday September 7, to meet his partner, but found that barriers to the platforms prevented him from helping her to get off the train, and that staff refused to let him through.

He said: “My partner asked me to help her off the train, as she had brought back a few more bags from her trip to Alsace. I asked the staff to help me access the platform and they refused. The security guard said that it was forbidden to go through the barriers and that he could not make an exception.”

Jonas then took to Twitter to express his frustration - and the swift reply from the official SNCF account prompted hundreds of adverse reactions.

One phrase sparked particular condemnation: “Each passenger must be able to carry their own baggage unaided.”

One user replied: “It is pathetic to say that the passenger must be able to carry their bags themselves. It is discrimination. It even has a name: ‘ableism’ [discrimination against disabled people].”

Yet another user asked: “So, I have chronic back problems, and you are clearly telling me that I have to just get on with it, by myself?”

Currently, ticket barriers are in place at 14 French SNCF stations, with more to come by the end of the year, and more still in 2020.

When contacted about the issue by news network FranceInfo, Voyages SNCF admitted that the tone of the initial tweet had perhaps been “a little abrupt”. Yet, it confirmed that “access to platforms is only for passengers with a valid ticket for the train on the platform”.

It added that “easier access for helpers is decided by staff on a case by case basis, for passengers in a sensitive situation”.

These would include, it said, “elderly people, families, pregnant women, disabled people or those with temporary injuries. These people should request help from staff upon boarding”.

While one person said that they had been allowed to assist their 85-year-old grandmother to her train, other Twitter users claimed that they had not been granted access, even when it appeared necessary.

One said: “That’s false, in Toulouse station they refused to let me help my daughter to her train, despite her having a huge suitcase and a baby in her arms.”

Another said: “Are you proud of yourselves? This summer, on the Belgian side, my husband was able to help me board (alone, with suitcase and a pushchair), but when I arrived in France, my parents were not allowed to access the platform. Just as well other passengers were helpful, because there was no staff around either!”.

Another user said: “I was not allowed to accompany my elderly mother, who sprained her ankle while getting onto the train. I swear that you will have a court case [on your hands] if she falls or injures herself more severely [in future]. She is not disabled, just old.”

Voyages SNCF admitted that “errors may have been made”, but said that the new barriers had been installed to improve security on the platforms and to prevent fraud.

It said that it was taking some time to “educate” passengers on the new system, but that it “was going rather well”.

The company already offers a free Accès Plus help service, which is designed to help “disabled people, or those with reduced mobility”. It assists passengers to their seat, and helps them with one bag.

However, the service must be reserved 48 hours in advance, and not all stations offer it.

Another option - called Mes Bagages - is available to help passengers carry extra bags, but it is a paid-for service.

22 hours ago
4
French farmhouse renovation: DIY tricks to get rid of rats