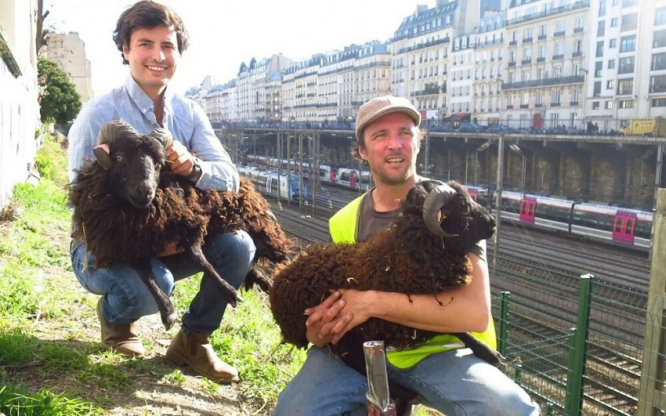 Founder of Greensheep Paul Letheux, left, with the two sheep and shepherd Jojo in Paris
By Connexion journalist

SNCF picked GreenSheep, a company specialising in “eco-grazing”, as an environmentally-friendly solution to taking care of its green space in the 17th arrondissement.

The sheep, watched by shepherd Jojo, have set up home there.

GreenSheep founder Paul Letheux said: “They will stay three years, but usually it’s longer, as the contract is often renewed.” A vet will check up on them from time to time as they watch trains going from Saint-Lazare to La Défense.

It is the expansion of an existing idea as the company’s sheep have already been living next to the Paris ring road for a number of years.

Initially, Mr Letheux studied landscape management but he thought about GreenSheep while taking care of a field near a farm in a rural village. He said: “We thought about trying to put in sheep to cut the grass, and it worked so well that companies around the farm started to contact us.”

The start-up owns more than 1,000 sheep and works in cities and rural areas around France.

They have only Ouessant sheep: “They are small, strong, they can stay outside all year long and do not easily get ill.”