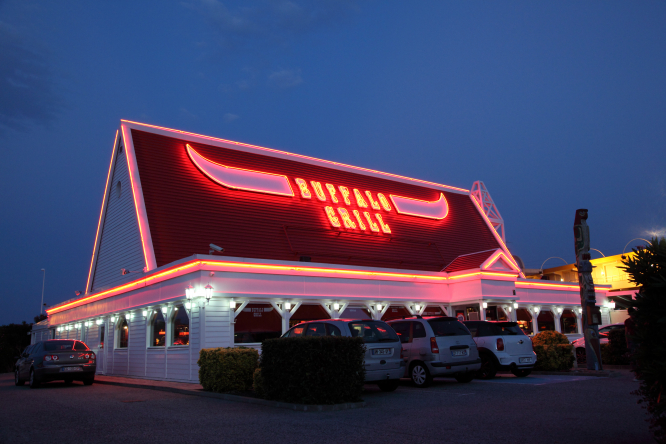 Buffalo Grill is to be rebranded, moving towards an American barbecue theme Pic: Philip Lange / Shutterstock

One of France’s most popular - and distinctive - ‘out-of-town’ restaurant chains is changing name and image.

Buffalo Grill - whose restaurants specialise in burgers, ribs and chicken wings - is to be renamed ‘House of BBQ’ in a bid to drop its Wild West theme and move towards an American barbecue image.

Its reinvention was announced in an advertisement published on Twitter by marketing agency Marcel, accompanied by the phrase “Bye bye les cowboys et les indiens.”

It shows the red bison statue that sits outside Buffalo Grill’s 360 restaurants being led away by a cowboy and an American Indian.

Buffalo Grill was founded in 1980 by businessman Christian Picart, who was inspired by American roadside diners and popular Western films.

By 1995, the chain had 140 outlets, generally in retail parks, and by 1997 had opened restaurants in Belgium, Spain, Luxembourg and Switzerland (although the Luxembourg branches later closed). It now employs around 7,750 staff.

Read more: Why are shopping centre chain restaurants so popular in France?

The Covid pandemic has represented the biggest challenge in the chain’s history, provoking a 40% drop in its 2020 turnover.

The new House of BBQ branding will see €80million invested in refurbishing the restaurants to create an ‘American steakhouse’ feel, but the menus will not be changing.

“No stress, there will still be the welcome salad and the Happy Birthday song,” Marcel Agency said on Twitter.

“Today, our home delivery services generate a €100million annual turnover and [we] home to become one of the leading [restaurants] in France” in this field, Jocelyn Olive, Buffalo Grill’s CEO, told Agefi.

Buffalo Grill has now begun to source all of its meat from France rather than from the rest of Europe, and is also offering smartphone ordering in its restaurants.