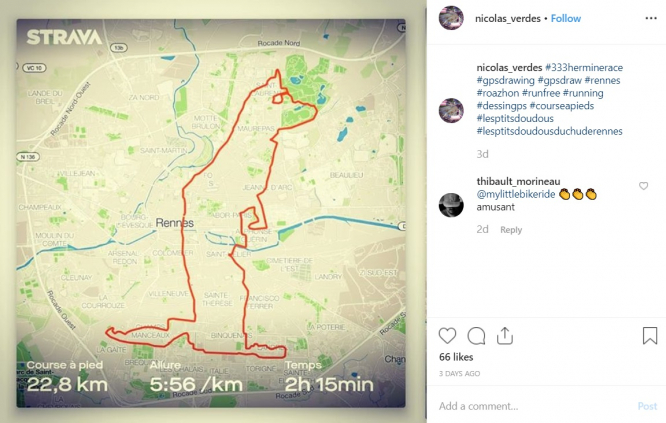 Local triathlete, Ironman and ultra-marathoner Nicolas Verdes posted the “sketch” on his social media account this week, alongside hashtags including #gpsdrawing and #lesptitsdoudous (“little cuddly toys”).

The post is part of a growing online trend called “GPS drawing”, in which runners or bikers use their GPS tracking apps to “draw” shapes with their routes.

The app (on a phone or watch carried by the sportsperson themselves) tracks the route taken, using GPS technology, and later produces a record of it after the session is complete. Users can then post their “maps” online using social media.

The technology was initially designed to help exercisers track and measure their training, but it has since mushroomed into a tongue-in-cheek online game.

In France, triathlete Marine Leleu and the cyclist Samuel Berthe have helped to popularise the practice.

Mr Berthe responded with a 29.7km elephant in Nantes.

This is not the first shape that Verdes has drawn to positive reactions; in January this year, he drew a map within a map, running a 34km detailed “outline of France” around central Paris.