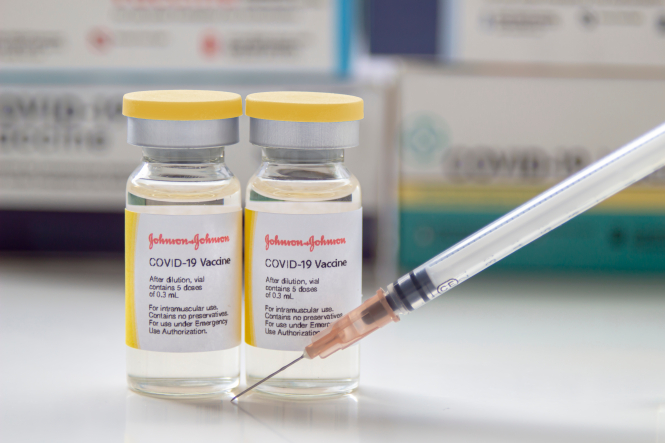 The Johnson & Johnson vaccine was given to one million people in France Pic: oasisamuel / Shutterstock

A new report finds patients who received the vaccine are ‘overrepresented’ in intensive care in two hospitals. Recipients are advised to get a second dose of the Moderna or Pfizer vaccine

A new French report has cast doubts over the efficacy of the Johnson & Johnson Covid vaccine, and raised concerns that those who have had the vaccine may be less protected against serious forms of Covid.

The report, published yesterday (September 13) by French medicines regulator ANSM, said there were a “significant number of failures of the Johnson & Johnson vaccine”

It defined ‘failure’ as a symptomatic infection of SARS-CoV-2, confirmed by a PCR or antigen test, at least 21 days after the Johnson & Johnson injection.

It found that the numbers of people who had received the vaccine and went on to develop serious forms of Covid or to die from Covid were higher than expected.

In two hospitals in Marseille and Tours, the report found an “overrepresentation of patients vaccinated with Johnson & Johnson”.

This comes as hospitalisations in France due to Covid have fallen below 10,000 for the first time since August 15. The latest figures show 9,986 people are currently in hospital with Covid, with 2,103 of those in intensive care.

The Johnson & Johnson vaccine was the last of four Covid vaccines to be authorised in France, on April 24, for people aged 55 and over.

Due to the fact that it only requires one dose it was given to 1,018,000 people, many of whom have difficulty accessing the health care system such as the homeless.

Since doses of the Johnson & Johnson vaccine started being given in April, 32 cases of Covid infection have been reported among those who received it. This means 3.78 cases per 100,000 vaccinated people.

The report found that cases were identified among people aged 73-87 most of whom had pre-existing conditions that put them at higher risk of severe Covid. Of the 32 cases, 29 were serious and four deaths have been recorded.

In 17 of the cases the variant could be identified and was found to be the Delta variant.

Following the report, further investigations into the vaccine have been launched.

Use of the Johnson & Johnson vaccine has been suspended in France since September 5.

France’s 800,000 remaining doses are expected to be redistributed into the Covax scheme and delivered to poorer countries, as happened with unused doses of AstraZeneca.

Who is most at risk?

Only two patients were immunocompromised, but 25 had an underlying condition, such as a lung condition, or diabetes.

The Janssen vaccine in France was only given to people aged 55 and over.

Studies have now found that the vaccine offers 66% protection in general, and 85% against severe cases of Covid; but just 57% against the Delta variant.

This means that the Janssen vaccine is now considered to offer “insufficient protection” against the Delta variant, the ANSM said.

What should I do if I have had a Johnson & Johnson vaccine in France?

Since the end of August, France’s Haute Autorité de santé has advised that people who have received a dose of the Johnson & Johnson vaccine get a second dose of either the Moderna or Pfizer vaccine, a minimum of four weeks after their last injection.

These injections can be booked in the usual way, for example on the Doctolib website, or by contacting your GP.

For example, when selecting a reason for your appointment on Doctolib, you can choose “second injection” (Pfizer-BioNTech) when booking.

4 hours ago
5
Map: in which French departments are Covid cases rising?