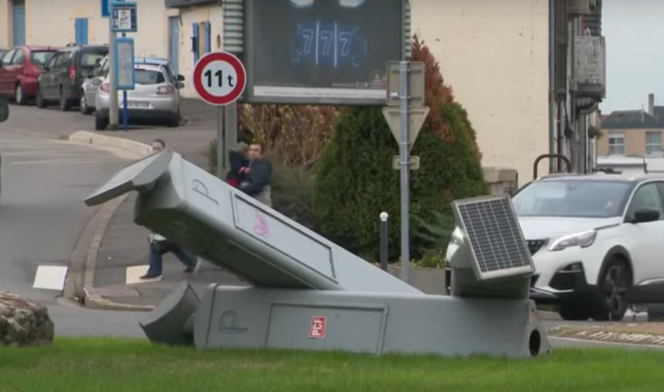 The machines have been seen unceremoniously dumped on roadsides, prompting some residents to see them as vandalism, a protest, or modern art
By Connexion journalist

The 200 or so large, grey, old-fashioned parking meters have been dumped in piles on several roundabouts and roadsides. They began to appear after the local council got rid of the meters and replaced them with free parking in the town centre.

But now, authorities in the town of Nevers (Nievre, Bourgogne-Franche-Comté) are planning to put up signs explaining their role in the phenomenon and the reasons behind it, after several residents wrongly reported the machines as an act of vandalism.

Some locals even said the machines could be a strange work of modern art, or even a protest by a disgruntled resident.

But the move is actually intended to show residents that parking is now free in the town centre, and it is hoped that this will encourage more people to drive into the town and shop in local businesses.

Pierrette Concile, deputy mayor assistant in charge of local commerce, said: “The idea is to say, when you do your shopping in Nevers, [you can now] spend your money at local shops, rather than on parking meters.”

One local shop owner, Philippe Meunier, said: “It is a good idea. It will likely show people who aren’t necessarily from the town that parking is now free. I can see how it has been a bit controversial, because everyone is talking about it. So I think it’s a good move. It’s great.”

The machines will not remain indefinitely, however. The plan is to install new explanatory signs with more information, and then to remove the meters entirely, with a view to selling them.