Train on platform 5 is the 7.32 for Hollywood 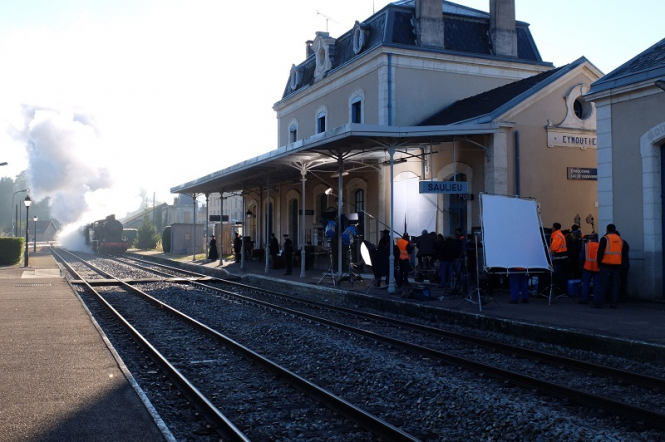 Mr Laylle (pictured below) is the manager of the SNCF cinema and filming department, responsible for talking to film producers, directors and designers and organising film shoots.

“By May this year, we had already received requests to provide locations for about 200 films – 50-60 of them full-length features, around 40 TV series, and news reports, document-aries and other short films,” he said.

“We have a crew filming about the bridges designed by civil engineer Gustave Eiffel right now and also adverts for brands such as Heineken.”

“We tend to grant permission to films we know will be released, which already have a distribution deal in place,” said Mr Laylle. “We also look at what is actually possible.”

When crews want to film inside a moving railway carriage, they hitch a special carriage to a train, so the film crew can work without disturbing other passengers.

“We need to see the script, see how many actors and how many crew.

“The image of the SNCF has to be as accurate as possible, so we explain how the ticket collectors work, how tickets are checked, how people get on the train. The everyday gestures, the lines... characters must say what SNCF staff would say, act as they are trained to act. So we can arrange for actors to spend a day training with the SNCF, or sometimes films use an SNCF employee who is also an actor.

“Or we can supply a real conductor to advise during the shoot, and say what’s real and what’s not.”

When it comes to shooting period films, the SNCF works with associations of ex-railway workers who have old trains and carriages, and sometimes even stations.

“Although the SNCF owns about 150 period trains, not all of them are available for rent so we either simply give producers the contact details of an association or, if they want the train to draw into an SNCF station, we can sometimes arrange that.”

“Tariffs depend on what is used – is it a railway carriage, where in France is it, what scenery, the security required for the shoot, the advisers, how many days, exactly when they want to shoot. The Gare du Nord in Paris is the busiest station in Europe, and the third busiest in the world.

“We transport enormous numbers of people and that traffic can’t be disrupted. A double-decker TGV can carry 1,200 people, so if two trains arrive simultaneously on a platform, you can suddenly have 2,400 people flooding past. We don’t allow filming at weekends but do very occasionally allow filming at night.”

It sounds like a fascinating and endlessly interesting job, but Mr Laylle says it can be quite stressful.

“We have fewer staff and more passengers, so it can be complicated.”

He also works with foreign film crews, from India, China, and Hollywood, so there’s lots of contact with international people.

“Each day is different, there’s no time to get bored.”

His career has been entirely in PR and marketing but he has always been interested in cinema. “I joined SNCF and did general PR, and then shifted to the cinema department, which makes company information films, so I worked with them before shifting over to this job.

“The shoot for new comedy La Grande Déraille, starring André Dussollier and Jérôme Commandeur, involved 20 days of shooting, four in a central Paris station, so that was massive.”

He does not generally speak to film stars but meets with producers and directors.

“Emmanuelle Béart was nice to work with, I think we made a great team. Each film has a whole series of teams, which do separate things.

“Some stars lose track of reality. They fuss if they don’t get the smallest thing, they can’t function without a whole team of assistants.

“Theatre actors are far more stable in their heads.”