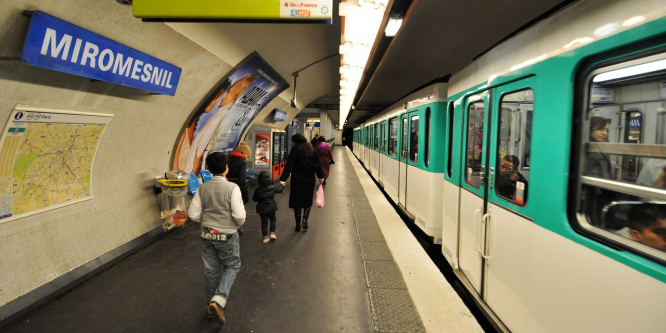 The union is calling on government body Le Conseil d’Etat for a change in the Code du Travail laws that would put more limits on the amount of time underground workers are permitted to be exposed to damaging, fine particulate pollution as part of their work.

Around 28,000 workers are exposed daily to dangerous levels of underground pollution, in stations, Métro stops, and in tunnels, the union said. The particulate matter is produced most frequently due to trains braking, or simply running along the tracks.

In a statement, CFDT transport and environment secretary general Patrick Rossi, said: “We cannot have a discussion on the ecological transition at the same time as exposing these workers to [pollution] levels high above alert thresholds.”

Yet, the current permitted level actually is under the threshold deemed to be dangerous. This threshold is currently set above a concentration - in fresh air - of fine particulate matter (the PM 10 particles) above 80 microgrammes (mcg) per cubic metre of air.

Currently, the Code du Travail states: “The average concentration of fine particulate matter in the atmosphere, inhaled by a worker, tested over a period of eight hours, must not be in excess of five milligrammes (mg) per cubic metre of air.”

This is 60 times’ lower than the danger threshold level.

Yet, the CFDT has said that the situation is still concerning, and has said that workers are in reality regularly exposed to levels that are actually above the danger threshold.

In its report, it said that Paris transport network the RATP had put air quality monitors in three stations (Franklin D. Roosevelt, Châtelet, and Auber). On Saturday, the PM 10 particles recorded at Châtelet reached 241 mcg per cubic metre of air - three times’ the threshold, the union said.

It added that the threshold had been permanently breached between the hours of 9h and 22h.

This is not the first time that La CFDT has sought to draw attention to the issue - in 2015 it made a similar request to Le Conseil d’Etat, but this was rejected.

Now, Mr Rossi said: “We spoke to the minister for work and ecology a few months ago, but we have not had any response.”

The union said that French health and food authority Anses had also been quiet on the subject, despite working on a report that could lower the threshold considered to be dangerous.

But Anses has said that it is working on the report, with the results due to be published in mid-May this year.

In 2017, the agency recommended that the transport industry should seek to “adopt thresholds that would limit exposure [to particles] and are more protective than current levels”.

And in a report from 2015, Anses said: “[There] is a risk to respiratory and cardiovascular health linked to workers who suffer chronic exposure to particles.”

Mr Rossi, from La CFDT, said: “We must put measures in place to protect workers. We could install electric plugs at regular intervals in the tunnels, to avoid using generators during improvement works. We must also avoid using diesel or petrol motors in tunnels.”

In response to the claims, RATP said: “Most engines used for improvement works in the Métro system are electric, with nearly no diesel ones left. Regarding workers and station staff, they are not forbidden from wearing a mask.

“Staff working in tunnels also have individual protection available to them."