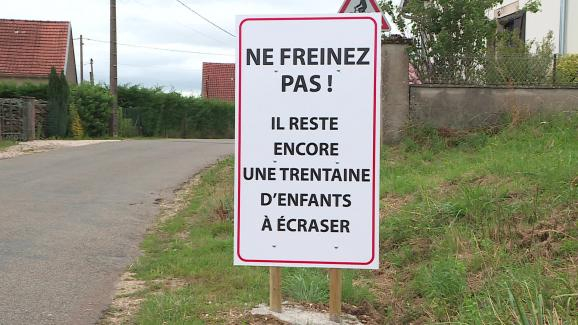 One new road sign in the village reads: “Do not brake! There are still around 30 children left to kill.”
By Connexion journalist

The commune of Samerey (Côte-d'Or, Bourgogne-Franche-Comté) has a 50 kph limit on its central road, but many drivers hurtle through the village at much higher speeds.

This has led to local residents living in fear of an accident, and some have even tried to add extra security to their gardens and stop their children playing outside for fear of the speeding vehicles.

One local teenager, who usually walks to high school, told news source FranceInfo: “I’m always careful, I walk on the grass, I always add a safe distance, but the cars - always the same ones - don’t watch out for anything.”

Now, having in vain tried all the “normal” ways to reduce speeding - such as normal speed limit signs - the commune has installed new signs, with dark messages such as: “Do not brake! There are still around 30 children left to run over.”

The shock tactics have been welcomed by residents. One said: “It’s good, it stands out, it’s alarming. These are messages that we are not used to seeing. Maybe it will make people change.”

The commune is the latest in France to attempt to use dark humour and reverse psychology to shock drivers into slowing down.

In 2014, another Côte-d'Or village, Bretenière, installed similar road signs; while the hamlet of Acquebouille (Loiret, Centre-Val de Loire) also did the same at the beginning of this year.

In March 2019, the town of Lugny (Saône-et-Loire, Bourgogne-Franche-Comté) also installed similar signs on a 30 kph-limit road that passes by a primary school, a collège (middle school), and the school canteen - on which buses and vehicles regularly drove above the speed limit

At the time, Lugny mayor Guy Galéa said: “Even if people only slow down to read the signs, we have already won. At least people are slowing down.”

In January this year (2020), the 250-inhabitant village of Montrécourt (Nord, Hauts-de-France), installed similar signs on its 30 kph road, going even further in its messaging.

Signs included a wooden cutout of the Grim Reaper, with the message: “Accelerate! [Death] is waiting for you at the end of the road”; and another cutout of an older woman holding a smoking gun.

Montrécourt mayor Mr Guillez said: “It’s humorous. It’s to try to slow people down...Because some vehicles come through here at 100, 100kph. You can see that [the warnings] aren’t that large.