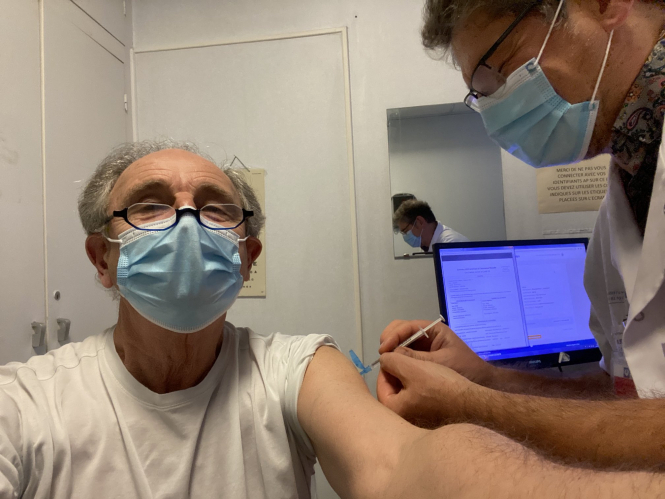 The honorary president of doctor’s union la Fédération des médecins de France has strongly criticised the rollout of the Covid-19 vaccination programme to doctors in France, saying the logistics are failing and doses are not available.

Doctor Jean-Paul Hamon said that he had so far administered 10 doses to patients last week and this week he has scheduled 40 more appointments - on Thursday and Friday - but he is not certain he will receive doses on time.

It comes after the vaccination campaign was expanded to allow GPs to inoculate priority patients using the AstraZeneca at their practices on February 25.

The rollout of the AstraZeneca vaccine to patients involves doctors signing up to order vials from pharmacies. Last week, doctors were able to order a total of 10 doses, or one vial. The amount is set to increase each week.

In the first week, around 29,000 GPs volunteered to be involved in the vaccination campaign.

The Direction Générale de la Santé has stated that this week (beginning March 1), that number fell to 19,187.

Dr Hamon said this was not the fault of the GPs.

“These numbers are distilled to put the responsibility on GPs. This stage of the vaccination campaign started during the February holidays. Traditionally, GPs go on holiday for one out of the two weeks.

“In my practice there are five doctors and four who want to participate [in the vaccination campaign]. Two were on holiday and came back after the first round of doses was administered and a third doctor is going on holiday for the next round.”

But he said this was not the problem. He said that 19,000 doctors was completely sufficient based on the low number of doses that doctors have been able to get a hold of.

He said that the principal stock of doses was being kept at hospitals and not being distributed correctly to pharmacies, where doctors can collect them. He called the distribution “complete anarchy”.

He said the doses were being kept at hospitals in order to vaccinate staff there, who were not necessarily choosing to be vaccinated.

Of the 1.32 million doses of AstraZeneca vaccine doses delivered to France, only around 119,000 had been administered by GPs to members of the public as of the evening of February 28, figures published by the Direction Générale de la Santé show.

The Ministry of Health had set the target of vaccinating 500,000 people with the AstraZeneca vaccine in the first week.

Dr Hamon said that despite reports to the contrary, he had noticed a strong demand for the vaccination among his patients.

Dr Hamon’s views that patients were willing to take the AstraZeneca vaccine are countered by Dr Jacques Battistoni, president of GP union MG France. He told newspaper Le Monde: “We shouldn’t have any illusions… we could have around 40% refusal [of the vaccine] if national surveys are to be believed.”

He called for pharmacists to be given permission to administer the vaccine to speed up the rollout.

France’s national health authority the Haute Autorité de Santé (HAS) stated yesterday (March 2) that a wider group of health professionals, including pharmacists, nurses and midwives, be allowed to administer all three types of vaccine approved for use in France, not just the AstraZeneca one.

Dr Hamon, though, said that it did not matter if more professionals could vaccinate people or there were more places for people to get vaccinated because there simply were not enough vaccine doses available.

“We are lacking vaccine doses and the solution is to expand the field of who can give the vaccine?” He asked.

“They say, go get vaccinated at your place of work but also you should do télétravail (work from home).

“They are opening new vaccination centres but there are no doses there. Okay, the pharmacists can start giving the vaccine, but with what?” He said.

He likened the situation to a comedic sketch.

France is aiming to vaccinate every willing adult against Covid-19 by the end of this summer. Dr Hamon said the success of this plan would depend on if the country receives enough doses.

“We have no idea if we will get them.”

Covid France: Only 25% of AstraZeneca vaccines used to date

French doctor: I was happy to get Covid vaccine