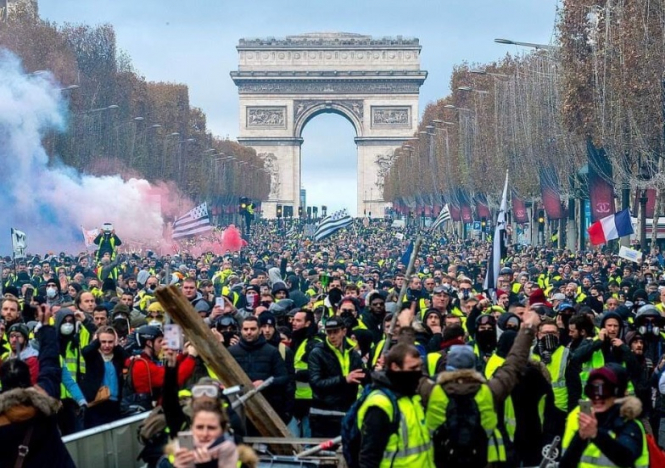 Over 8,000 police and officers are expected to be deployed across Paris alone, with dozens of armoured gendarmerie vehicles also in operation across the capital, as well as thousands of CRS officers.

Authorities are preparing for what they fear could be an even more violent Saturday (December 8), after protests on December 1 left hundreds injured and arrested, and many buildings and monuments vandalised and burned.

It will the fourth consecutive weekend of protests.

Despite repeated calls from the government for peaceful protesters to distance themselves from the violence, it is feared that there may be an increased presence from “a hardcore” of far-right and far-left extremists “determined to smash and kill”, according to a statement from the Élysée Palace.

At least 25 Facebook Groups entitled “Acte 4” and calling for large Saturday protests in significant areas of the capital, are in operation online, according to news source LCI.

Builders working on Place de la Bastille removing barriers and rushing to clear up anything that could be smashed or thrown together tomorrow. Preparations for gilets jaunes Act IV feel like lock down #Paris pic.twitter.com/gHBW4nI58A

Over 3,500 members have been counted across the two biggest Facebook Groups alone. Over 20,000 people have also stated their potential interest in gathering at the weekend.

Eric Drouet, leader of a prominent Group, who has called himself a spokesperson of the movement, has called on protesters to gather “near to sites of power, such as the Champs-Élysées, l'Arc de Triomphe, and Concorde”, as well as Bastille, and Bercy.

This is in direct contravention of calls from minister for the Interior, Christophe Castaner, for peaceful protesters to distance themselves from the violence, and not come to Paris on Saturday.

Mr Castaner said: “We must separate the peaceful expression of people’s anger, from the unacceptable violence that we have seen increase over these last three weeks.

"We are far from the time [November 17, the first weekend of the protests] when people occupied local roundabouts without spite or belligerent intentions.”

One CRS officer, who was present at the protests last Saturday, said: “I have never seen violence like this. They have reached a level of violence, to the point of setting civilian buildings on fire.

"I don’t know what is waiting for us this Saturday.”

Security forces are expecting to use armoured gendarmerie vehicles, video-surveillance and social media to track the most violent protesters.

Jean-Marc Bailleul, president of security agency le Syndicat des Cadres de la Sécurité Intérieure (SCSI), said: “We must let the CRS move around. We have also asked for lightly armoured vehicles from the gendarmerie, which will be more effective than barricades.

"But it’s unprecedented because [the violence has been] completely anarchic.”

Prime Minister Edouard Philippe has said that “The Republic is solid” this weekend, and reiterated his “determination to ensure the safety of the French people”.

Unions across the country have also called for calm, with representatives from groups including the CFDT, CGT, FO and l’Unsa admitting that the Gilets Jaunes’ anger was “legitimate”, but denouncing “all forms of violence in the expression of grievances”.

Some major events set to take place in Paris this weekend have also been cancelled in anticipation of violence, including Christmas animal event “le Noël des Animaux” by animal rescue society the SPA, and several Ligue 1 football matches.

Windows being boarded up at the Banque de France at Bastille in preparation for tomorrow's gilets jaunes Act IV. pic.twitter.com/jIolEkFEEN

Shops and restaurants in high-risk areas have also been warned by police to remove anything from outside their establishments that could be damaged or used as a weapon, and to “take all the measures possible to protect your site from possible violence”.

Paris restaurants and shops barricade themselves ahead of Saturday's protests in fear of repeat of last week's mayhem #Yellowvest #Giletsjaunes #Paris pic.twitter.com/RY49XAEH4Z

Visitors and tourists are invited to check events and openings before they travel.

Climate change march "La Marche Pour Le Climat" is still set to go ahead, although its route has been modified.

The situation comes as a new poll by agency Odoxa found that 60% of French people are “worried” by the protests; a figure that has risen sharply compared to poll results from last week.