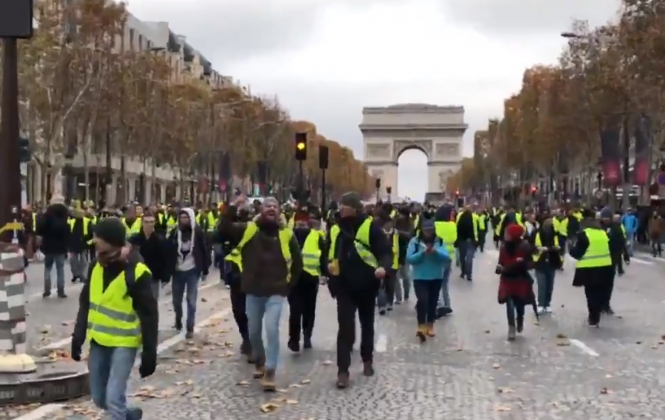 Gilets Jaunes protesters have warned that they are willing to target ports and international trade if their demands are not met.

But confusion surrounds the next stage of the movement, after at least one activist said demands for a second protest in Paris next Saturday that were circulated on social media had not come from organisers.

Spokesman Benjamin Cauchy, who helps organise the Toulouse branch, said that the pitch for a new demonstration was made by "the far right or the far left", which have been suspected of trying to hijack the movement.

Regional organisers have been discussing the options of nominating representatives who can "discuss constructively" with the government, Mr Cauchy said - adding that no decision on another major demonstration in Paris would be made until after President Emmanuel Macron had unveiled his "social pact" plan on Tuesday.

The President is expected to unveil what has been called a Climate Council, made up of a number of experts including Laurence Tubiana, former negotiator for France at COP21, Pascal Canfin, President of WWF France, and leading figures from the Intergovernmental Panel on Climate Change. According to a report in the Journal du Dimanche, the Council will have the resources and influence to 'intervene in all public policies,' and will ensure their 'social and economic sustainability'.

Meanwhile, protesters have warned that they could blockade French ports if the government does not listen to their concerns. Any disruption could make it more difficult for passengers to board ferries for crossings from France to the UK or Ireland.

Thousands of people have said they are 'interested' in an event named "Act 3 - Macron quits" that has been created on a Gilets Jaunes' Facebook page. It is due to take place on Saturday, December 1, on the Champs-Elysée.

"By December 1st, we'll have to do it properly. No violence and five-million French people in the street! Our movement is growing. We must NOT give up", reads the detail for the event.

Last Saturday, 24 people were injured, including five police officers when an illegal protest on the famous thoroughfare turned violent, while 101 people have been detained by police.