Gilets Jaunes: Saturday sees half as many protesters 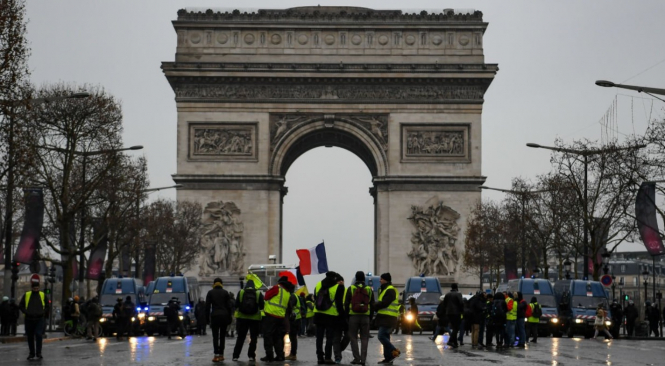 There were fewer protesters in Paris and across France this weekend, but thousands of police still patrolled the streets
By Connexion journalist

According to the minister for the Interior, 66,000 protesters came out across France for “Acte V” on Saturday December 15 - just over half of the 126,000 counted the Saturday before.

After the violence seen in Paris and other cities over the past few weeks, the country had been put on high alert again this weekend, with 69,000 police officers and security operatives on deployed, including 8,000 in Paris.

There were also armoured vehicles in the streets of Paris, and shops had boarded up their windows in some areas.

Yet, all shops remained open, as did all Métro stations. Similarly, most major tourist attractions that closed last weekend - including the Eiffel Tower - remained open.

By 18h in Paris, there had been 168 arrests and 115 people taken into police custody - well below the numbers seen last week.

There were some clashes in Bordeaux, where 4,500 Gilets Jaunes marched, with some throwing tear gas and homemade projectiles. There were also smaller marches in Toulouse, Nantes, Besançon, Nancy, Saint-Etienne and Lyon, but numbers were especially low in Rennes, Caen, and Strasbourg.

One protester admitted: “[The small numbers are] maybe a little bit of a failure, but that is because of the State, which is stopping us from protesting properly.”

In Paris, around 1,000 protesters staged a “sit-in” in front of the Opéra de Paris, calling for “people to rediscover freedom and sovereignty”.

They also held a one-minute silence for the victims of the Strasbourg attack, and held their hands behind their head in reference to the lycée protests of last week (which saw lycées forced by police to kneel in the same position).

Political figures had previously suggested that the Gilets Jaunes protests this weekend should be cancelled completely, in respect to the victims of the Strasbourg terrorist attack.

Others suggested that protesters should give law enforcement services chance to patrol the country properly as the terror alert was raised to the highest possible “urgence attentat”.

Yet, others had called for further protests, saying that the government had not sufficiently addressed the Gilets Jaunes’ grievances.

Richard Ferrand, MP for La République en Marche (LREM), stated his approval of the reduction in protest size. He said: “Their demands have been massively responded to. The time for dialogue has come.”

One protester said: “We will fight until we win our case”, and another said: “We have support. Everywhere we go, you can hear horns [in support of us]”.