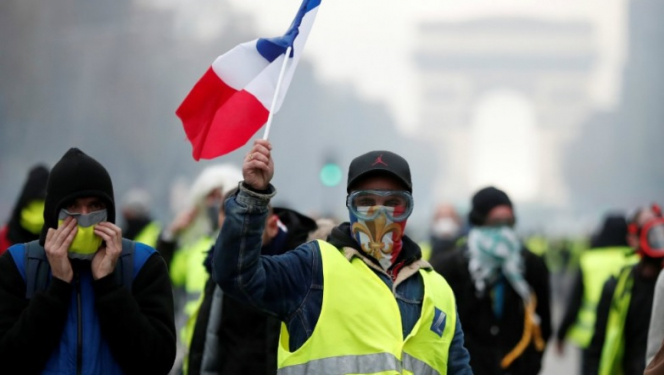 Numbers were reportedly down across the country, but some violence and clashes remained
By Connexion journalist

Four people were injured in Rouen when a car that had been blockaded in forced its way through. The driver was in the car with his wife and their baby, and he became scared when protesters began jumping on the vehicle and throwing projectiles.

Emergency services looked after those who were injured in the incident, and the driver later handed himself in to the police station.

In Bordeaux, around 5,000 people marched through the streets, with one placard reading “death to the rich”. Police responded to some protesters throwing projectiles with water cannon and tear gas.

In Toulouse, the march itself was mainly peaceful, although some scuffles broke out towards the end, and windows of some shops and banks were smashed towards the town centre.

Across the rest of Occitanie, and also in the Grand Est regions, some protesters called for a “return to the source”, and called for blockades and protests around major roundabouts. Yet, local authorities said they would not tolerate any “road blockades or traffic filtering”.

The drop in numbers across France comes in the same week as two well-known figures associated with the marches - Eric Drouet and former boxer Christophe Dettinger - were handed their sentences in Paris.

Mr Drouet was given a one-month prison sentence for holding “non-authorised protests”.

Dettinger, was sentenced to 30 months “in jail” - although with 18 months’ suspended and 12 months in “semi-liberty” - meaning he will spend nights in jail, but have relative freedom during the day. He is also banned from staying in Paris for six months.

Some protesters in the capital briefly became more aggressive when the crowd came across the philosopher and academic Alain Finkielkraut, well-known son of a Polish immigrant to France.

Mr Finkielkraut received anti-Semitic insults and whistles, he has said in subsequent interviews, and needed protection from police to avoid any further attacks. He said, however, that not all protesters had been violent, and that one had commended his work.

The latest protest comes as public opinion has turned against the movement for the first time. This week, a poll found that 56% of French people wanted the protests to stop.