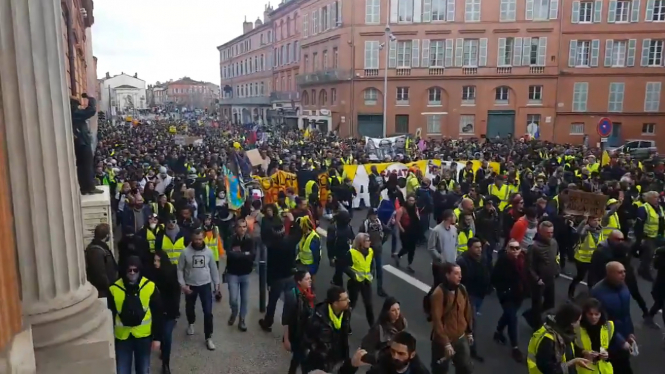 Official figures from the minister for the Interior put the number of protesters at 39,300 across the country, including 4,000 in Paris. This is compared to last weekend, which counted 46,600 nationwide and 5,800 in the capital.

Gilets jaunes protesters themselves continue to dispute the official figures, and claim that many more were present.

In Paris, protests remained largely calm along the 12 km march route, under a heavy police presence, and gilets jaunes themselves riding security motorbikes around the parade. By early afternoon, nine people had been arrested.

There were also major marches in Nice, Strasbourg, Lille, Nantes, Toulouse and Bordeaux, and many other towns.

Some of the biggest clashes took place in Alès (Gard, Occitanie), with tear gas and rubber bullets reportedly deployed against protesters in the streets.

Rubber bullets, tear gas and thousands of #YellowVests on the streets in Alès in southern France on March 2 as #GiletsJaunes revolt against neoliberal capitalism continues!#ActeXVI #Alès pic.twitter.com/cBnAXHbbtk

The latest protests come ahead of March 16, a date on which some gilets jaunes have pledged a “big day” and “big month” of action. March 16 coincides with the final day of the national Grand Débat, launched by President Emmanuel Macron on January 15, and will also mark four months of the movement.

This week, the President said that the gilets jaunes movement was “no longer understandable to a great many citizens”, but some protesters countered that Mr Macron’s debate was a “masquerade” and “smoke and mirrors”.

Eric Drouet, recognised as one of the movement’s leaders, this week posted an online video, saying: “We have a very big March 16 that is coming. [We are] more organised than ever, more motivated than ever in many regions, and many areas that are going to march on Paris.”

Addressing himself directly to Mr Macron, Mr Drouet added: “You are going to have a month of March where you do not sleep much."