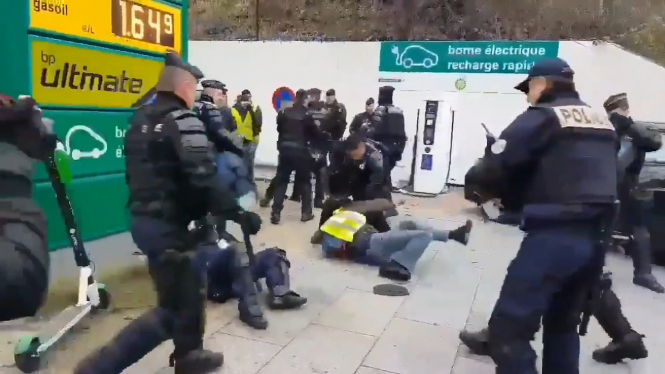 The authority l'Inspection Générale de la Police Nationale confirmed the inquiries as news also emerged that three gilets jaunes protesters had been taken into police custody after simulating the “decapitation” of an effigy of President Emmanuel Macron.

Regarding police violence, many protesters have reported injuries from flash-ball shots (shots from non-lethal weapons often used in riot situations by law enforcement officers), and tear gas grenades since the protests began on November 17.

Videos appearing to show gilets jaunes protesters on the ground and being beaten by officers during the incidents were also filmed and posted online to much criticism.

Similarly, videos of student protests from early December - showing lycéen students kneeling on the ground with their hands behind their heads after reprisals from law enforcement - also sparked outcry on social media.

Other inquiries are focusing on the alleged injuries inflicted by the controversial defence ball thrower machine (lanceurs de balle de défense, LBD), on a gilet jaune in Toulouse, and a lycée student in Orléans.

The interior minister, Christophe Castaner, said: “There has not been a specific count of issues linked to the use of LBDs.”

Police confirmed that three demonstrators had been taken into overnight police custody on Friday December 28 in Angoulême (Charente, Nouvelle-Aquitaine), after mounting the “decapitation” of an effigy styled to look like President Macron, before other gilets jaunes spectators.

The three perpetrators are now the subject of an investigation into the alleged charges of “public provocation to commit a crime” and “contempt of a person in public authority”, the Charente prosecutor said.

Prime Minister Edouard Philippe tweeted his criticism of the act, saying that it was “out of the question to minimise such actions, which must be the subject of unanimous condemnation and penal sanctions”.

Mr Philippe also said that gilets jaunes violence against police officers during the protests had reached “unheard of” levels.

But the lawyer for the three men, Me Pierre-Henry Bovis, said that the “decapitation” was merely an “act of theatre organised ‘by gilets jaunes for gilets jaunes’”.

He said that the accused were “ready to apologise if they had shocked anyone” despite having “acted legally” by “using their right to protest”.

The gilets jaunes protests - which began against rising fuel prices and since mushroomed into a wider movement against rising living costs and the government in general - have been ongoing since November 17.

New protests took place this weekend (December 29 and 30), with more events expected across the country on December 31 and New Year’s Day.