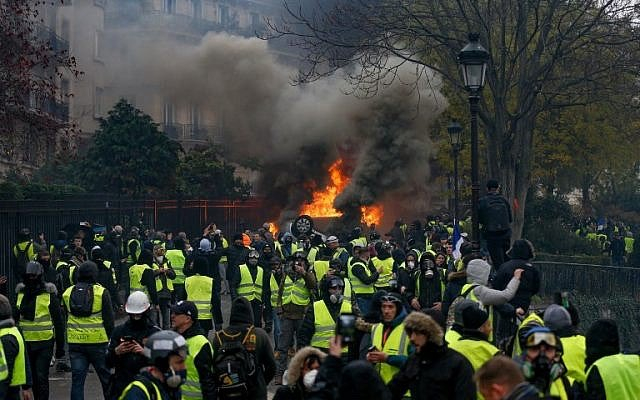 In Paris, tensions erupted in Place d'Italie, with cars burned and police responding with tear gas
By Connexion journalist

According to the minister of the interior, 4,700 people marched in the capital. Protest organisers put the overall nationwide number at 39,530 for this “Acte 53”.

The most recent equivalent protests took place on Saturday March 9, when an estimated 28,600 people turned out.

This Saturday (November 16) in Paris at around midday, small groups of alleged “casseurs” - violent vandalising groups - were broken up by law enforcement near Place d’Italie, with tear gas and water cannon used to disperse crowds.

Damage included cars and rubbish bins being set alight and overturned, and bus shelters being smashed, and tensions breaking out between protesters and police. Some protesters were injured, as were some independent journalists who were also on the scene, including one cameraman who was seriously injured by a teargas cannister, and taken to hospital.

A war memorial in the centre of Place d’Italie was also vandalised, and some windows of public buildings were smashed.

#Acte53 - A scene from Paris. Another view of the HSBC bank that was attacked earlier today. https://t.co/BfIxSUQGtQ

Authorities demanded that the protest end early, towards 14h, “in light of violence and abuses”, a statement said.

There was also unrest in Place de la Bastille, where law enforcement blocked one authorised march that had began at la Porte de Champerret.

Head of police Didier Lallement said: “[This protest in Place d’Italie] brought together individuals who were not defending a cause, but were being destructive [and] systematically mounting attacks against security forces and firefighters.”

But one protester, who had travelled in from the Eure-et-Loire with her son, said: “It’s pitful, terrible that the protest has been forbidden. Protesting is a right, and they are refusing us that right. Our anger is provoked by the State.”

Reports suggested that the protests became more peaceful after the area had been evacuated by police. There was also calm in other parts of the city, such as the Champs-Elysées, along which all protests had been banned.

This weekend marked the anniversary of the gilets jaunes protests, which began on November 17 last year as a protest against rising fuel prices, swiftly turning into a mass movement against the government.

Minister for the interior Christophe Castaner tweeted: “The damage and violence committed as part of the protests call for strong and unanimous condamnation. In Place d’Italie, there were few gilets jaunes and many more vandals.”

In a further statement, he said: "We did not see bad cops being aggressive towards nice protesters. We saw vandals attacking public spaces, forcing the police to intervene."

Some other cities also experienced violence; in Nantes (Pays de la Loire), an estimated 1,000 protesters clashed with law enforcement; while in Montpellier, the official residence of MP Patrick Vignal was vandalised with windows smashed and graffiti daubed on the walls.

Elsewhere, smaller groups occupied roundabouts - as protesters did at the start of the movement last year - and distributed leaflets to passing drivers, without any violence or unrest. Several hundred were seen in Albi, Auch, and elsewhere in the Gers (Occitanie).

A protest “against the politics of President Macron” was also held in Grenoble (‎Auvergne-Rhône-Alpes), with protesters united under union banners GCT, FSU, Solidaires, Unsa, and CNT, holding a peaceful protest without any damage.

The latter organisers said they were also planning a further march on December 5, to coincide with what is already expected to be a day of planned transport strikes.