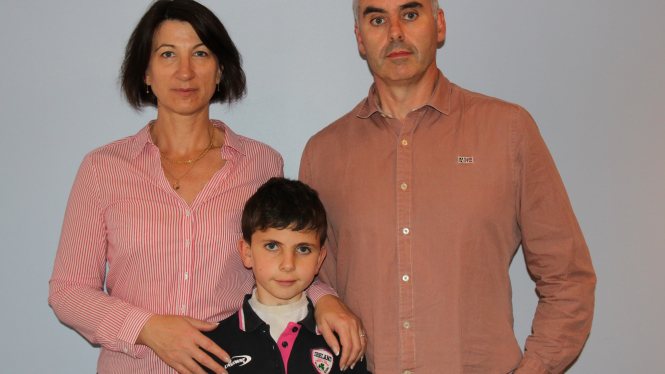 Sabine and Thomas Grataloup with son Théo
By Samantha David

Sabine and Thomas Grataloup are preparing to sue the US-based multinational agrochemical firm Monsanto, which developed the herbicide in the 1970s, as they believe it led to their son Théo’s birth defects.

Théo was born in 2007 with his oesophagus linking his stomach to his lungs, instead of his throat, while his trachea was so malformed it had to be removed at birth.

Mrs Grataloup, who runs a travel agency with her husband near Lyon, said she did not know that she was three to four weeks pregnant when she used a glyphosate-based weedkiller.

She says important development takes place on the foetus’ organs including the oesophagus and trachea at this stage.

“When we made the link, our first thought was to raise the alarm,” she said. “We wrote to Monsanto and the government but got no reply, so our lawyer is working out the best strategy.”

Now 10, Théo has had more than 50 operations but will never breathe through his nose. To prevent water entering his lungs via his stoma – an opening in the neck to allow him to breathe – he cannot have a shower or bath, or swim.

He needs constant nursing and, as his vocal chords do not work so he will always speak with a strangled-sounding voice.

The couple say they want compensation and to draw attention to the dangers.

“We have a lot of scientific evidence and expert witnesses, and the publicity is alerting other families, who are contacting us with similar experiences.

Mrs Grataloup said: “We think we can at least make manufacturers print warnings on packaging. It is utterly wrong that people are still buying and using these products without knowing the risks.”

Glyphosate, the world’s most-used herbicide, is back in the spotlight as the EU considers renewing its licence for another 10 years – a decision was imminent as Connexion went to press.

It is the main ingredient in the herbicide Roundup, which is Monsanto’s biggest seller (although the firm is no longer the only one making products based on glyphosate).

A 2015 report by the World Health Organisation’s cancer agency said gly­phosate was ‘probably carcinogenic to humans’, based on ‘studies of exposures – mostly agricultural’. People are exposed by living near sprayed fields, using it in the garden, and in food, but at ‘generally low’ levels, it said.

Last year, the European Parlia­ment passed a resolution recommending glyphosate be limited to professional use because of concerns about ‘carcinogenicity and endocrine-disruptive properties’.

However the EU’s Euro­pean Chemi­cals Agency recently concluded there is no evidence to link it to cancer in humans.

France’s Ecology Ministry said the country will vote against renewal in the EU, but it could go through if 16 states out of 28 vote for it.

According to the green charity Géné­rations Futures, traces of glyphosate are widely found in foods like cereals, pasta and chick peas, although the UN’s food and agriculture organisation and the WHO said last year it was ‘unlikely’ to pose a cancer risk through food.

Farming union FNSEA says more time is needed to find alternatives but organic farmers have never used the product and others are abandoning it.

Farmer Alain Davy from Orne, has not used it for years. “There have been moves to ban it before but vested interests are strong,” he said.

“Monsanto has lots of money to spend on lobbying and its voice is heard. The EU report saying glyphosate was safe was a word-for-word copy of so-called research produced by Monsanto.”

Mr Davy says he has not used heavy-duty chemicals since 2005, preferring a mechanical weeding machine. Yields are down but the loss in earnings is offset by savings from not buying expensive products.

He added: “There are all sorts of chemical insecticides, fungicides, pesticides, and fertilisers which are dangerous to health.

“Farmers know it, but they’re frightened. Young farmers start with so much debt, and pressure is on to guarantee good crops to pay them off. They daren’t risk lower yields or even a bad year, so they are under pressure to use chemicals.”

He adds that banning a product in France, or even in the EU, will not resolve the problem unless it is banned worldwide.

“There are products which have been banned in Europe which are still being sold in the developing world. We need a change of attitude, to understand how to co-operate with nature and the environment.”

Connexion contacted Mon-santo for comment. It referred us to the Plateforme Glyphosate France representing the seven largest producers in France, who said: “For 40 years studies have been done into possible side effects of using glysophate.

“None of them have established any link between the use of glysophate by pregnant women and birth defects.”