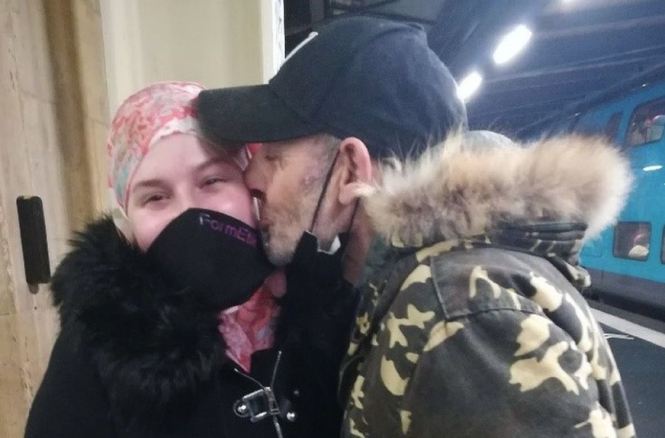 The two were reunited in Nancy after 14 years, and have since been in contact via video call
By Hannah Thompson

A homeless father and his long-lost daughter - who had been in care - have been reunited for the first time in 14 years, after an appeal was launched in the south of France to support the man.

Patrice Perez, a 64-year-old who has been homeless for 30 years, had lost touch with his daughter and had not seen her for 14 years.

This weekend, the two met up on a train platform in Nancy, Meurthe-et-Moselle; after an appeal launched by two inhabitants of Gironde, Nouvelle-Aquitaine, successfully brought them together.

Christelle Quillet and Virginie Rascar are friends based in Lasparre, a town in the north of Gironde. They launched a campaign to help Mr Perez after he sought shelter from the freezing temperatures in Ms Quillet’s shop.

She told local news service France 3: “It was -6C at night. That is not normal in our area. He said, ‘Hello Madame, happy new year’. I offered to let him warm up in my shop but it wasn’t enough. I called a friend and we said, ‘How can we go home, sit on our sofas in the warm, and act as if nothing has happened?’”

The duo set up an online crowdfunding campaign on Leetchi to support Mr Perez, and quickly raised almost €900. The Gironde department then offered Mr Perez three nights’ stay in a local hotel, and the local Red Cross offered him clothes. A hairdresser in the area cut his hair for free.

But Mr Perez said that he was also looking for his daughter Aurore, who had been placed in care at the age of 12 after Mr Perez became homeless following a number of difficulties.

The two women then posted on Facebook, and the post was shared more than 400 times. Two hours later, Aurore was found. She is now aged 26, and lives in Nancy.

A meeting in Nancy was set up, and the two met each other for the first time on January 17. They have since been connecting over video calls.

It turned out that Aurore had also been seeking her father.

She said: “I had called round all the mairies but had no response. I was very emotional. I was a teenager, now I’m a young woman. There are so many things to catch up on. After 14 years, you don’t know how to say things. But we will get there. Father and daughter - it still means a lot.”

When asked what he would say to his daughter during their first full-length conversation, Mr Perez said: “Oh, that’s my secret.”

Now, Mr Perez is keen to rebuild his life, spurred on by the support he has received. Authorities in Lasparre are working to help him obtain new identity papers, and to create a file for him so he can access social services support to get back on track.

Speaking of the two friends’ help for Mr Perez, Ms Rascar said: “We don’t feel as though we have done anything extraordinary.”