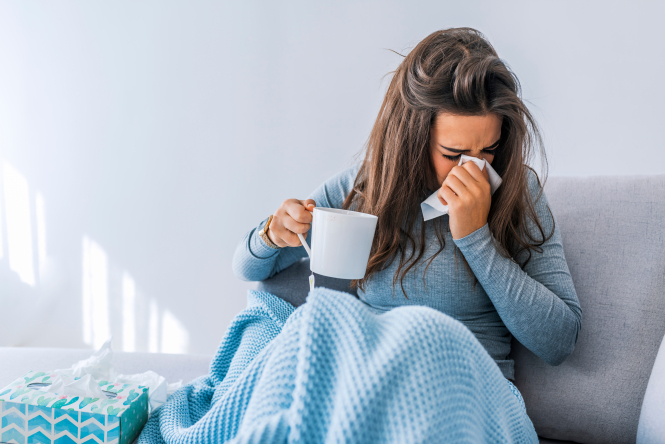 Flu is now at epidemic and pre-epidemic levels across most of France, with vaccinations to the general public available until January 31 Pic: Dragana Gordic / Shutterstock

Cases have been rising since autumn began, and have now reached ‘epidemic’ proportions, breaching the official threshold of cases.

SPF said that the week of Christmas had been marked by “a rise in flu indicators, especially among children”.

An official epidemic has been declared in Occitanie and Ile-de-France while pre-epidemic levels are being seen in Brittany, Grand Est, Hauts-de-France, Pays de la Loire and Provence-Alpes-Côte d’Azur.

Only Normandy and Bourgogne-Franche-Comté have so far remained at lower levels.

The Covid pandemic has had a mixed impact on flu cases.

While barrier gestures helped to stop the spread last year, this means that the population has a lack of immunity this year. This could lead to a rise in flu cases, as well as those for other viruses such as gastroenteritis.

The flu vaccination campaign opened to the general public on November 23 this year, and will remain open until January 31.

Read more: France’s flu vaccine campaign opens to all: how to get a dose

Cases of bronchiolitis are also spreading at epidemic levels across much of the country. This is despite a “slight improvement” this year compared to previous years.

Yet, hospitalisations for bronchiolitis, which mainly affects babies, have dropped in the past week. The contagious condition causes a cough and breathing difficulties.

While it is usually managed at home, severe cases can require urgent hospitalisation.

SPF said there had been “a drop in trips to emergency (A&E) and of hospitalisations”. In total, 3,824 children visited A&E due to bronchiolitis last week, of which a third were hospitalised.

Bronchiolitis epidemic spreads across all of metropolitan France