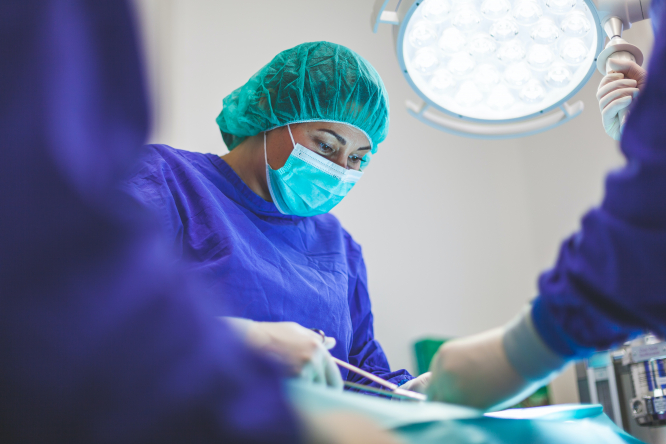 There are currently only two robots that can perform these operations, both developed by Quantum Surgical, a privately funded medical device company from Montpellier. The robot helps physicians in a treatment known as “elimination by microwaves”. A small needle is inserted directly into a cancerous tumour in a patient’s liver and microwaves are passed along the needle. Until now, the needle has had to be guided by the hand of a specialist doctor but now the robot can do this part.

First, a full 3D scan is taken of the patient, giving doctors images upon which they can plan the route the needle will take. With the help of artificial intelligence and image analysis, doctors are able to calculate the best route, angle and depths for the needle to go. Then, it is over to the robotic arm. It reproduces the planned pathway using the 3D images, guiding the needle to the tumour.

Professor Thierry de Baère, head of therapeutic imaging at the Institut Gustave Roussy in Villejuif, one of Europe’s leading cancer centres and one of two in France where the robot is currently used, said: “The robot can put a small needle in exactly the right place, from the right direction and at the right depth.” Prof de Baère has performed five operations using the technology and all the patients were discharged the next day.

Has your hayfever been particularly strong this year? Global warming is behind the long pollen season, a specialist has warned

Who can take part?

“Regarding how effective the treatment was in destroying the tumour, we will need a little more time to get the results, so we will have an answer in around three months,” Prof de Baère said. The first operation involving the robot was carried out by Professor Boris Guiu and his team at Montpellier University Hospital on a 56-year-old patient on June 4. Prof de Baère and his team were the first to treat a patient with liver metastasis using the medical robot on July 7.

The World Cancer Research Fund said liver cancer is the fifth most common cancer in men and the ninth in women. There were more than 840,000 new cases worldwide in 2018. Prof de Baère said this new robotic technology has many advantages. “We hope that with this we can improve precision and, therefore, efficiency, and we hope it can be better than by hand,” he said. He believes the technology will become widely used around the world. “Doing these things by hand is probably going to disappear,” he said. “But we’re at the beginning of it all, maybe in a few years.”